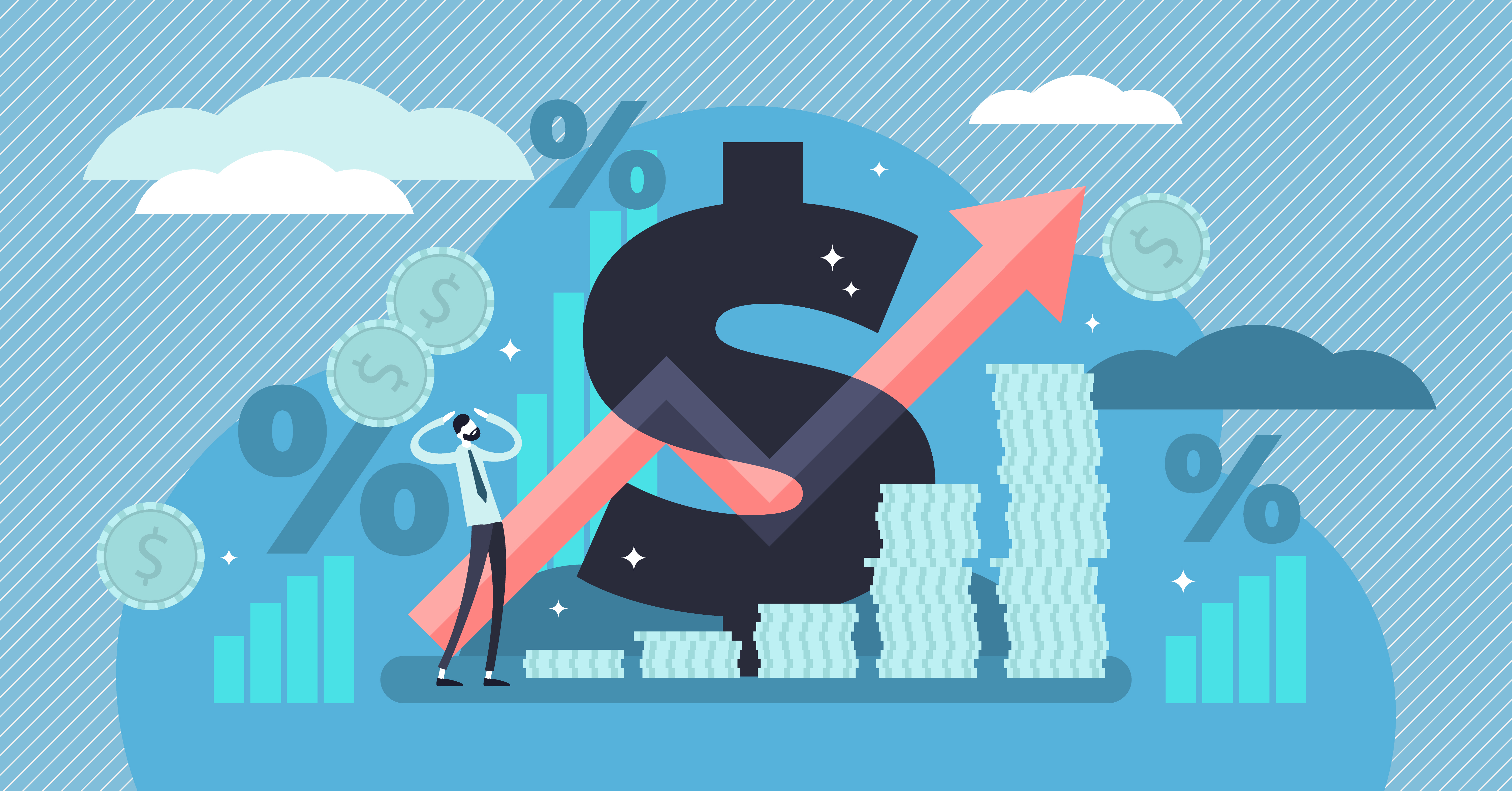 Whether it's a house with a white picket fence in the suburbs or a high-rise apartment in the heart of a vibrant city, owning property is considered part of the “American Dream” by the vast majority of Americans. However, for many Americans, that dream has become a nightmare because of ever-increasing home prices and stagnant wages.

To understand how expensive the American Dream has become — and whether it is still achievable today — we gathered Census data from 1960 to 2017 on home prices, rents, and household income. After adjusting for inflation over time, the future of the American Dream seems rather gloomy: Median home prices increased 121% nationwide since 1960, but median household income only increased 29%.

Home buyers aren’t the only ones struggling. Median gross rent increased by 72% since the 1960s, more than twice the growth seen by adjusted incomes, making renting costlier than ever and saving for a future home difficult.

Rising rents and increasing home prices make it harder than ever to save for a down payment and afford monthly mortgage payments. In this report, we'll dig deeper into which areas of the country the average homeowner can afford, and which housing markets are headed for regression because of an imbalance of home prices relative to household incomes.

Here are the nationwide insights you need to know.

Let’s start with an important metric to help us understand and contextualize how expensive buying a home has become: price-to-income ratio.

This is a gauge of how long it will take home buyers to save for a down payment, and whether they’ll be able to afford their monthly mortgage payments.

Since the 1960s, however, the difference between home prices and income has nearly doubled. By 2017, the nationwide price-to-income ratio was 3.6, showing over 3.5 years of household income was necessary to purchase a house. In fact, the nationwide price-to-income ratio hasn't been at a healthy balance since the 1990s. Homes are increasingly unaffordable, leading to unstable housing markets where demand can't meet supply.

Home prices in the West are increasingly out of line with household income, while only 16 out of the 100 most populated areas in the U.S. are below the healthy 2.6 price-to-income ratio.

While these numbers are concerning, taking a regional approach can help us understand what's driving these large discrepancies between household income and home prices to determine where homeownership is realistic for the average American.

Let's break down each region of the U.S. and analyze specific cities.

The West: Where the American Dream goes to die

In 1960, the price-to-income ratio for Western states was 2.1, but by 2017 it increased to 4.9. While median home prices increased by 195% in the West, median household income only increased by 26% since the 1960s. This means the growth rate of home prices is 7.5 times more than the growth rate of household income, making the Western region the least affordable region in the U.S. The average real estate commission fee in this areas ends up being substantially higher than any other regional housing market.

The huge difference in growth rate appears to be driven by coastal metropolitan areas and new hubs such as Denver. To investigate this possibility, we looked at San Francisco, CA, Los Angeles, CA, Seattle, WA, and Denver, CO.

The growth rates draw a similarly discouraging picture for homeownership in these metros. Since 1960 median household income grew by 59% and 56% in Seattle and Denver, respectively, whereas median home prices grew by 286% and 239%.

Historical housing data for San Francisco paints a similar picture. San Francisco is one of the few metro areas that almost doubled its median household income since 1960 with a growth rate of 91%. San Francisco's tech boom has led to an increase in high demand, high-paying jobs. However, home prices increased 531% since 1960, reserving homeownership for the hyper-rich, despite the financial growth of the metro. For context, the median home price in 1960 adjusted for 2017 inflation was $134,713, whereas in 2017, the median home price was $849,500. That means you'd need to save $169,900 for a 20% down payment.

It appears the American Dream of homeownership is dead in many parts of the West.

The Northeast: Home prices are slowly coming back down to earth

This trend is in contrast with the trend observed between 2010 and 2017 nationwide and in the Western region. If this trend continues, there may be still hope for home buyers in the Northeast.

To examine whether this trend applies to coastal metros and inland ones and whether there are affordability differences between these areas, we looked at New York City, NY, Boston, MA, Albany, NY, and Pittsburgh, PA.

The inland metros, Albany and Pittsburgh, are more affordable compared to their coastal counterparts. The price-to-income ratios of these metros were 3.2 and 2.6 in 2017, respectively. In Albany, median home prices increased by 132% since 1960.

Median household income increased by 50% since 1960, which is higher than the national average.

Similar to the trends we observed in the Northeast and New York City, between the years of 2010 and 2017, home prices decreased by 7%, whereas household income increased by 14%, reducing the growth rate gap between these two measures.

The future of homeownership is complicated in the Northeast. Overall, the inland metros represent more affordable conditions and even for the major coastal metros like New York City, there might be hope.

The South: Still affordable, but for how long?

Compared to the Western and Northeastern regions, the South does not show as much of a discrepancy between home prices and household income.

From 1960 to 2000, price-to-income ratios were around 2.6, making homeownership attainable during these years. Home prices jumped during the 2000s and kept steam through the housing crisis.

To investigate whether the observed discrepancy increase between growth rates holds true for some metropolitan areas, we looked at Charlotte, NC, Columbia, SC, and Oklahoma City, OK.

In 2000, the growth rate differences between home prices and household income were 17%, 13% and 23% for Charlotte, Columbia and Oklahoma City, respectively. By 2017, however, the same growth rate differences increased to 66%, 56%, and 82%, but household income couldn't keep up, causing these metro areas to be less affordable relative to prior years.

The good news is even with this increasing discrepancy between the growth rates over the last years, in 2017 the price-to-income ratios were 3.2, 3.0, 2.9 and 2.8 for Charlotte, Birmingham, Columbia, and Oklahoma City, respectively. These values are not much higher than the healthy housing market average of 2.6.

Although the growth rate difference between home prices and household income has accelerated in recent years, they are still lower than those observed in the Western and Northeastern regions. Now might be the time to buy for would-be homeowners living in the South, as home values steadily rise and price-to-income ratios remain reasonable.

The Midwest remains the most affordable option for hopeful buyers

The Midwest represents the only remaining region in the US where the median borrower doesn't need to suffer a serious financial burden. Even in 2017, the overall price-to-income ratio in the Midwest was 2.9, relative to a ratio of 4.2 averaged across the other three regions. Looking at the growth rate over time, we find that while median home prices increased by 82% in the Midwest since the 1960s, median household income increased by 29% since the 1960s.

Let's look at three major Midwest metropolitan areas, St. Louis, MO, Des Moines, IA, and Cincinnati, OH, to see why the Midwest is so affordable. In 2017, the price-to-income ratio was 2.8 for St. Louis, and 2.7 for Des Moines and Cincinnati, inline with other healthy housing markets.

During the 1980s, St. Louis and Des Moines household incomes were actually growing faster than home prices. By the early 2000s, this pattern flipped, and home prices began to outscale household incomes. The discrepancy between income and home prices makes home buying still within reach in many major Midwestern metropolitan areas, making the Midwest the most affordable region to buy a home today.

The American Dream is changing with the times

Looking at our data and reported findings, it's no surprise that the American Dream is transforming. According to Massachusetts Mutual Life Insurance’s survey, 71% of respondents use vague terms such as “financial independence” when describing the American Dream rather than equating it with homeownership.

For many Americans, homeownership is completely out of reach, with sky-high rents making it impossible to save for a large down payment. The good news is that there are still many inland cities where homeownership is affordable.

In the West and Northeast, especially in the coastal metros, household income could not keep up with the growth of the housing market over the years. This pattern is especially visible for the Western metros. In the South, homeownership is still affordable; however, if the growth rate gap between home prices and household income continues to widen, home buyers might struggle. The Midwest seems to be the only remaining region where purchasing a house with little financial struggle will be possible at least in the near future.

To determine how the cost and affordability of housing changed over time, we gathered data on median home values, median gross rent (monthly), and median household income (yearly). We indexed each measure to 1960 values and compared how these measures changed from 1960 to 2017. We adjusted all of our measures for 2017 inflation, and compared these measures on national, regional, and metropolitan-level for selected areas. Below are the where we gathered each measure from.