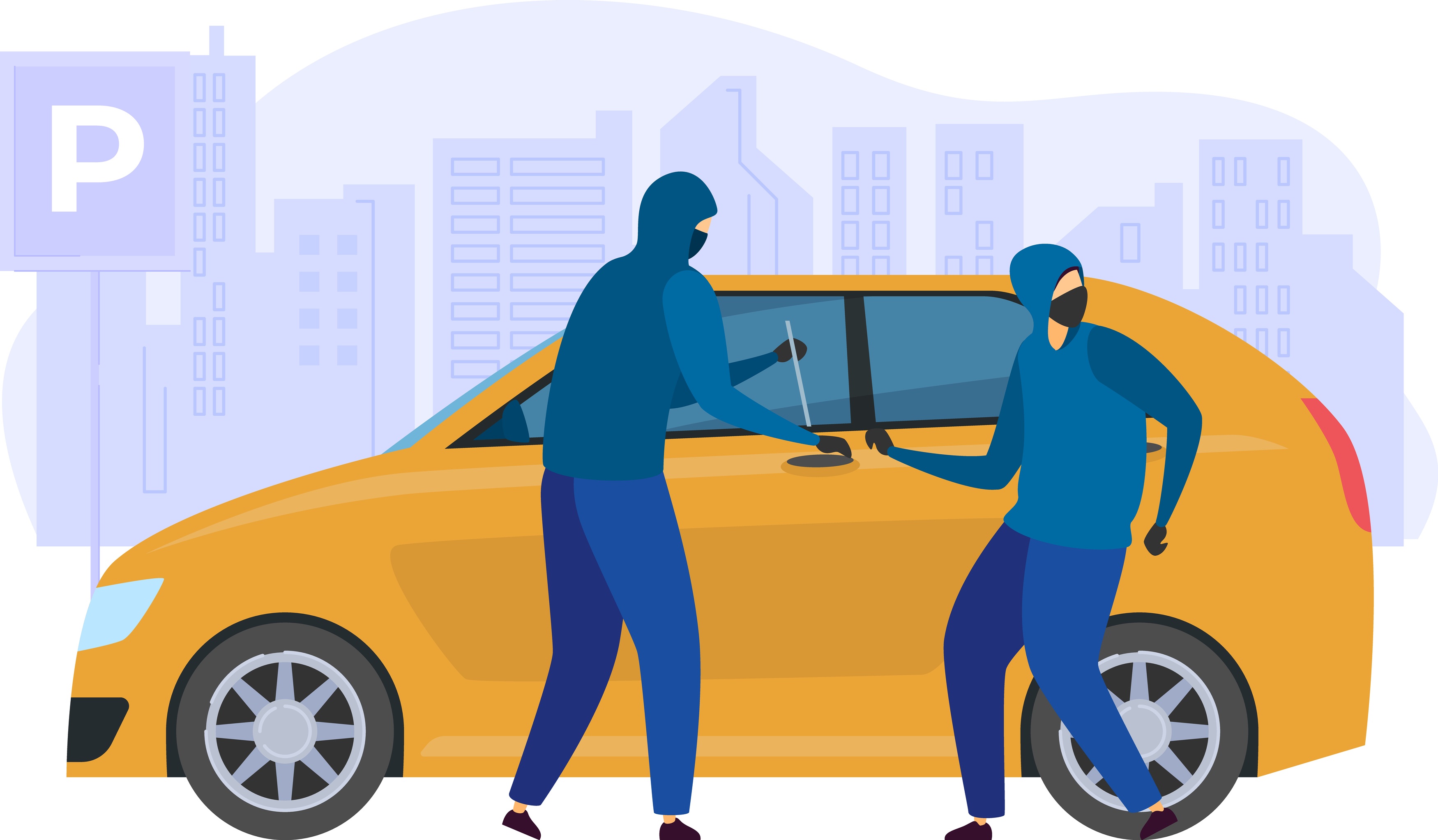 Over 8 million crimes were reported in the United States in 2018, leaving many residents vulnerable to victimization. These crimes are especially common in more densely populated areas.

People often equate crime rates with the safety of a city and overestimate the likelihood that they’ll be a victim of a crime. In fact, crime rates in the United States are much lower than they were just 20 years ago and continue to decline.

But many of those statistics are based on city population and crime, as opposed to entire metro areas, which can be misleading. Considering the majority of people in metro areas live in the suburbs, we explored crime at the metro level, instead of as a function of the principal city.

Living in a metropolitan area can be dangerous. But crime shouldn’t be the only factor considered when evaluating the safety of a city: Higher density also means more traffic accidents, potential exposure to disease, and a host of other possible dangers.

These “danger factors” vary considerably from location to location, so we investigated the danger of living in each of the 50 most-populated metros in the U.S. as a function of a resident’s likelihood to experience a crime, natural disaster, traffic fatality, or contaminated drinking water.

We chose the most populated metros because a large proportion of American residents currently do or will at some point live in those metro areas. Importantly, the danger factors we use to rank our metros are often considered when people choose to buy a home and, as a result, can impact home values.

Violent crime in particular not only makes it difficult to sell property, but spreads through adjacent neighborhoods, significantly affecting home values and local economies. The presence of crime and other dangers, like natural disasters or traffic fatalities, directly impacts people’s finances by causing fluctuations in the value of equity in properties and home and vehicle insurance costs.

Here’s how we ranked the metros:

Overall Most and Least Dangerous Metros

Most and Least Natural Disasters

Likelihood of Crimes Depends on Location

Crime across the United States has decreased over 50% since the 1990s across the board, and we saw a sharp decline from 2018 to 2019. That decline was partly due to continued low violent crime rates in populated areas like San Francisco and New York City, and a drop in the notoriously crime-ridden Chicago area, according to an analysis by the Brennan Center .

The prevalence of crime seems to be falling, but these numbers might be misleading: according to the Pew Research Center, only 43% of violent crimes and 34% of property crimes were reported to police in 2018. And that’s just in relation to the crimes tracked by the Bureau of Justice Statistics, meaning crimes are more frequent and more underreported than we think.

Violent crimes include aggravated assault, robbery, rape, and non-negligent manslaughter / murder. The prevalence of violent crime is relatively low (compared to property crime), with national rates hovering around 370 incidents per 100,000 people, 3.3% lower than it was in 2017.

Even with the general deflation of violent crime over the last decades, location is a determining factor in whether someone will be a victim of a violent crime and how people commit crimes.

Robberies are far more common in the West and least likely in the Northeast and Midwest. Rape and murder, on the other hand, are relatively similar across regions, but slightly less rampant in the Northeast.

Aggravated assault, which is far more common in the southern and western states, requires the use of a weapon or force that is intended to cause bodily harm or death. There are interesting regional differences in the types of weapons used: Perpetrators in the South and Midwest are much more likely to use a firearm than those the West or Northeast.

Assailants in the Northeast, however, are 1.8x as likely to use their body as a weapon than those in the South.

The prevalence of crime in the metros included in our ranking ranged, as well.

And even though law enforcement are working diligently to reduce crime in the Memphis area, approximately half of the homicides in the entire state of Tennessee occurred in the metro.

Crimes described in other reports often focus on the principal city in metro areas, as opposed to the metro as a whole. But the majority of metro residents live and work in the suburbs. To highlight the importance of examining crime at a more macro level, take the oft proclaimed most dangerous city, St. Louis.

The murder rate in the principal city of St. Louis is nearly 60 per 100,000 residents, which is nearly 10x the rate nationally.

But when we consider the entire metro area, it’s clear that most of the population isn’t at risk: Fewer than 13 incidents per 100,000 people.

Larceny, which is defined by the FBI as “the unlawful taking, carrying, leading, or riding away of property from the possession or constructive possession of another,” accounted for over 70% of property crimes in the U.S. last year.

Much like violent crime, property crime rates vary greatly by location. Those in Salt Lake City and Memphis, for instance, are much more likely to be the victim of a property crime than residents in Birmingham.

Memphis, again, fell behind the curve with the highest property crime rates in the 50 most-populous metros with 4,270 crimes per 100,000 residents. In fact, residents in the Memphis metro are nearly twice as likely to be a victim of a property crime than the average U.S. resident (2,199.5 / 100,000).

Natural disasters, including tornadoes, hurricanes, severe storms, extreme drought, flooding, earthquakes, volcanoes, freezing conditions, snow, and fires, happen across the country but are more likely in some metros than others.

Midwestern states, for instance, are exposed to more severe storms that produce tornadoes. However, the West is hit by drought and earthquakes more often, and coastal cities are at risk for hurricanes.

Even when you consider the variety of disasters that devastate the country, certain metros are hit harder than others.

Over 35,000 people were killed in transport accidents in the United States in 2018. Those accidents included any accident that involved a land, air, or water vehicle, including affected pedestrians, cyclists, and vehicle occupants. The majority (~95%) were highway traffic accidents involving passenger vehicles.

The rate of transport fatalities was highest in the South, where nearly 18 people per 100,000 were fatally injured in 2018. The Northeast, in contrast, had the lowest incidence at 50% of that of the South.

Those trends were true at the metro level as well: the 5 most-dangerous metro roads were all in Tennessee (Nashville and Memphis), Florida (Jacksonville and Tampa), or Alabama (Birmingham).

Traffic fatalities may be more common in the South because people drive farther in those states. Commutes, for instance, are further in southern states and people typically put more miles on their vehicles in states like Texas, Florida, and Georgia, according to the Insurance Institute for Highway Safety (IIHS).

The safest metros for vehicle occupants were San Francisco, Boston, New York City, San Jose, and Los Angeles. The lower rates of transport fatalities in these areas is likely due to the abundance of public transportation, which is 10x safer than driving according to reports by the American Public Transportation Association.

Clean drinking water isn’t something that immediately comes to mind when considering safety, but contamination can cause issues from bouts of vomiting to deadly illnesses like typhoid fever, cholera, or kidney failure.

But Flint, Michigan isn’t the only place affected by contaminated drinking water. According to Science Magazine, “in any given year from 1982 to 2015, somewhere between 9 million and 45 million Americans got their drinking water from a source that was in violation of the Safe Drinking Water Act.”

While rural and low-income communities are more likely to be impacted by drinking water violations, the risk of coming into contact with non-potable public water nevertheless exists in metro areas.

And, importantly, the risk varies depending on where you live. Drinking water violations ranged from 3.3 in Detroit to 158 per 1,000 residents in Oklahoma City.

According to research reported in the Proceedings of the National Academy of the Sciences , Oklahoma City is located in a hot spot for violations. In fact, 43% of the community water systems in the state had repeat offenses compared to only 11% of all systems.

Violent and property crime rates were gathered from the FBI’s uniform crime report, 2018 unless data were not available for a particular metro. Earlier FBI or state / city government reports on the same variables were used for Denver, New York City, Chicago , Birmingham, Kansas City, and Raleigh because they were not available in the FBI data.

Natural disaster data were aggregated at the county level from FEMA’s historical disasters declarations dataset . We matched county names in each state with the county FIPS code and used FIPS-CBSA crosswalks to match counties to each metro area.

Transport fatalities were gathered from the CDC’s WONDER database and included all air, water, and road vehicle fatalities recorded in each metro area.

Drinking water violations were data gathered from the EPA’s SDWIS Federal Reports . To account for population, we divided the number of violations for each metro by the population in that metro area. Again, we used crosswalks to match counties to metros.

To calculate the ranking, we standardized all five variables using z-scores, then multiplied each by the variable’s weight in our ranking system. More specifically, violent crime standardized scores were multiplied by -3 (negative because higher numbers indicate higher crime rates compared to the average), standardized natural disasters and transport fatality scores were each multiplied by -2, property crimes by -1.5, and drinking water violations by -1.

After weighting the scores, we summed all variables for each metro to get a final score, which was ranked from highest (safest metro) to lowest (most-dangerous metro). A file of our aggregated data, including formulae can be found here.