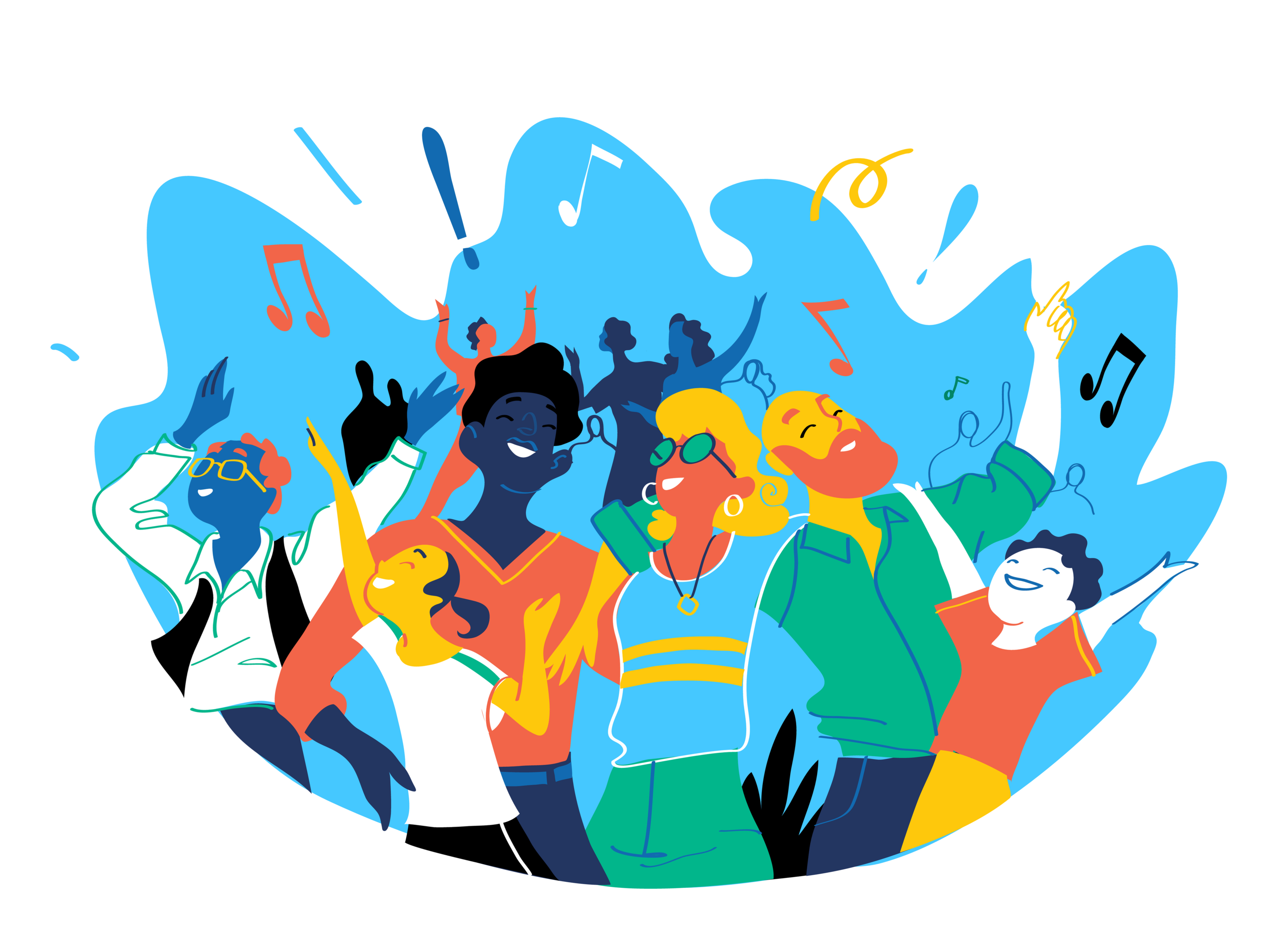 Whether it's a sonorous trumpet solo or the streetside strum of an acoustic guitar, a city's local sound is the heartbeat that keeps it alive.

That heartbeat is still strong, despite the pandemic's impact on other industries. Streaming services saw a 26% increase in profits in early 2021, comprising nearly two-thirds ($4.6 billion) of the industry's revenue that season.[1] Meanwhile, revenue from vinyl sales increased by 94% to $467 million in just the first half of 2021. Overall, global music revenues have steadily and continuously grown over the past six years.[2]

And now that some performers and bands are going back on tour, we wanted to know: What are the best music cities in the U.S.? ⓘ

To find out, we analyzed publicly available data from the U.S. Census, Bureau of Economic Analysis, Bureau of Labor Statistics, Indie on the Move, and more to rank the 50 most populous metro areas in the U.S. from the best to the worst cities for music.

Our weighted rankings evaluated criteria including:

Keep reading to find out if your city has made its claim to fame – or if your local music scene is out of tune!

The best music cities in our study rock at combining affordability and general interest with a decent number of music events and venues.

Overall, the top 15 metros for music are playing the hits for every metric:

How Much Do You Spend on Concert Tickets?

Want to know how much your concert tickets are costing you in any of the top 50 metro areas? Plug your info into the calculator below to find out! 👇

Although Nashville is an unmistakable hub for country music, it's not the only thing crowning Music City the music capital of America. Nashville ranks No. 2 across every genre of our Google Trends research – and No. 1 for heavy metal in addition to country.

As if ranking first for the number of small concert venues per 100,000 residents (6.7) wasn't enough, career musicians in Nashville also earn more — hourly $28.81, higher than 30% of the cities in our study. With so many venues and artists and ticket prices ($130) that beat out 32% of other metros, Nashville is THE city for music in the U.S.

As the capital of Michael Jackson's home state, Indianapolis does not disappoint. Ranking No. 4 in small concert venues per capita (5.3 per 100,000 people), Indianapolis is a great place to catch an affordable show.

Additionally, full-time musicians in Indianapolis make more hourly ($31.40) than artists in 40% of the cities in our study, and the metro ranks No. 5 in Google Trends for both alternative music and blues.

The hometown of indie rock icons such as Elliott Smith, The Decemberists, and Blitzen Trapper, the City of Roses is a muse for musical minds.

Portland music-lovers can look forward to nine different festivals planned for 2022 – 67% more than the average metro area. Additionally, with more career musicians per 100,000 residents (38) than 88% of the metros we studied, Portland remains a top city for performers.

Although tied with Portland for the number of festivals planned for 2022, Austin has more intimate venues per capita (5.2) than 92% of other metros we analyzed.

Known for big musical gatherings such as Austin City Limits and South by Southwest (SXSW), Austin also beats other metros based on price: Average ticket prices in Austin ($111) are cheaper than 76% of the cities in our study.

From the Pour House to the Lincoln Theatre, North Carolina's capital has plenty of places to catch your favorite solo act, indie band, bluegrass duo, or punk lineup. Even better, Raleigh offers cheaper ticket prices ($104) than 86% of the metros in our study and at a 17% discount compared to the average city ($126).

An audience for any genre, Salt Lake City is a great space for musical artists. SLC is home to 25 career musicians per 100,000 people – over 50% more per capita than other metro areas – and ticket prices ($122) that run cheaper than 52% of the other cities in our study.

St. Louis can boast a lively blues scene thanks in large part to late blues patriarch Bennie Smith, who helped pioneer the genre's characteristic sound.[3] In addition to chart-topping blues, St. Louis residents enjoy 17% savings on the average concert ticket, spending only $104 per ticket versus $126 in the average metro area.

The Gateway City might also be a full-time musician's gateway to fame: St. Louis musicians earn more hourly ($37.53) than artists in 78% of our other metros.

Not only are shows relatively affordable compared to income in San Francisco, but there's also a great financial opportunity for artists in the metro that gave us the jazz fusion powerhouse Santana. Full-time San Francisco musicians make more hourly ($48.84) than full-time musicians working in 94% of our other cities.

With more intimate performance spaces than 66% of the cities in our study (2.9 per 100,000 people), SF is one of few cities that can boast a music scene that supports both its audience and its musicians.

Known for the "Seattle Sound" courtesy of groups such as Tina Bell's Bam Bam, Foo Fighters, Pearl Jam, and Soundgarden, this metro ranks No. 3 for working musicians. With 53 musicians per capita, Seattle is home to 89% more artists than the average metro (28).

Local career musicians also make more than the average artist would in 90% of other cities studied. Additionally, a monthly concert ticket at average Seattle prices ($126) would eat up 1.9% of the median annual salary of a local. Compared to 2.5% across all cities, that's 23% less of a person’s budget in Seattle!

Buffalo locals enjoy tons of local venues at a fraction of the cost that residents in many other cities do – Buffalo's average ticket prices ($119) are cheaper than tickets in 38% of our metros.

Additionally, there are tons of great acts to catch, as Buffalo is home to an average of 45 musicians per capita, more career musicians than 90% of other cities.

Not only is Boston the birthplace of iconic acts such as Pixies and The Cars, but Boston musicians can also boast higher hourly wages ($31.59) than artists in 66% of the cities in our study, making this metro a great stop for artists and fans alike.

Even relative to other professions in Charlotte, musicians here are doing incredibly well. The median hourly wage for full-time artists is 1.57 times ($44.34/hour) the median wage of all Charlotte residents ($28.34/hour).

Not only can musicians make a decent living in Charlotte, but locals can also count on catching their favorite bands at rates ($112 per ticket) that are lower than the average ticket prices in 72% of other cities.

High demand for burgeoning pop hits has driven Columbus' music scene into the top 15 music cities and has clearly fostered a love for live shows.

Known as the hometown of country-pop group Rascal Flatts, Columbus has more festivals planned for 2022 (7) than 64% of the cities in our study. And with more career musicians per capita (25 per 100,000 people) than 50% of the metros we looked at, this city is a great place for aspiring pop stars to network and perform.

Coming in second place for working musicians among metros in our study, Hartford is another great city for artists looking to make a living.

Career musicians here can expect to make an average of $35.65 per hour – more than full-time artists make in 74% of other metros. With 31% more small concert venues per capita (3.8 per 100,000 people) than the national average (2.9), Hartford musicians are set up for success.

Not only are full-time musicians raking in the dough here, but they're also making more than their non-musician neighbors! The median hourly wage for a person with the job title “musician or singer” in Cincinnati is 1.6 times ($47.53/hour) the median wage of all local residents ($29.80/hour).

When we analyzed the data by specific ranking factors, we discovered some cities hit both impressive highs and lows.

Not every metro can hit the high notes, and 10 of our cities performed pretty poorly when it came to venues and events, general interest, and affordability:

It's clear that folks living in these 10 cities aren't as interested in music experiences as the residents of other metros. Compared to the average city in our study, the bottom 10 cities have 7% lower Google Trends scores across all genres.

Clever Real Estate compared the 50 most populous U.S. metro areas across a number of metrics, listed below. Each metric was normalized and then graded on a 100-point scale. The combined weighted average of the scores determined the “music city” score upon which the final ranking was based.

The metrics used are as follows:

Since 2017, Clever Real Estate has been on a mission to make selling or buying a home easier and more affordable for everyone. 12 million annual readers rely on Clever's library of educational content and data-driven research to make smarter real estate decisions—and to date, Clever has helped consumers save more than $70 million on realtor fees. Clever's research has been featured in The New York Times, Business Insider, Inman, Housing Wire, and many more.

Nashville, Tenn., is the best overall city for music fans, with Indianapolis and Portland, Ore., close behind. The top 15 cities have an average of 3.9 small concert venues per capita, versus 2.9 venues per capita in the average city in our study. Learn more.

Austin, Texas, is America's No. 1 live music metro, with an average of five concert venues per capita and nine music festivals planned for 2022 – almost 2x more than the average U.S. city (five)! Following close behind are New Orleans and Nashville, Tenn. Learn more.