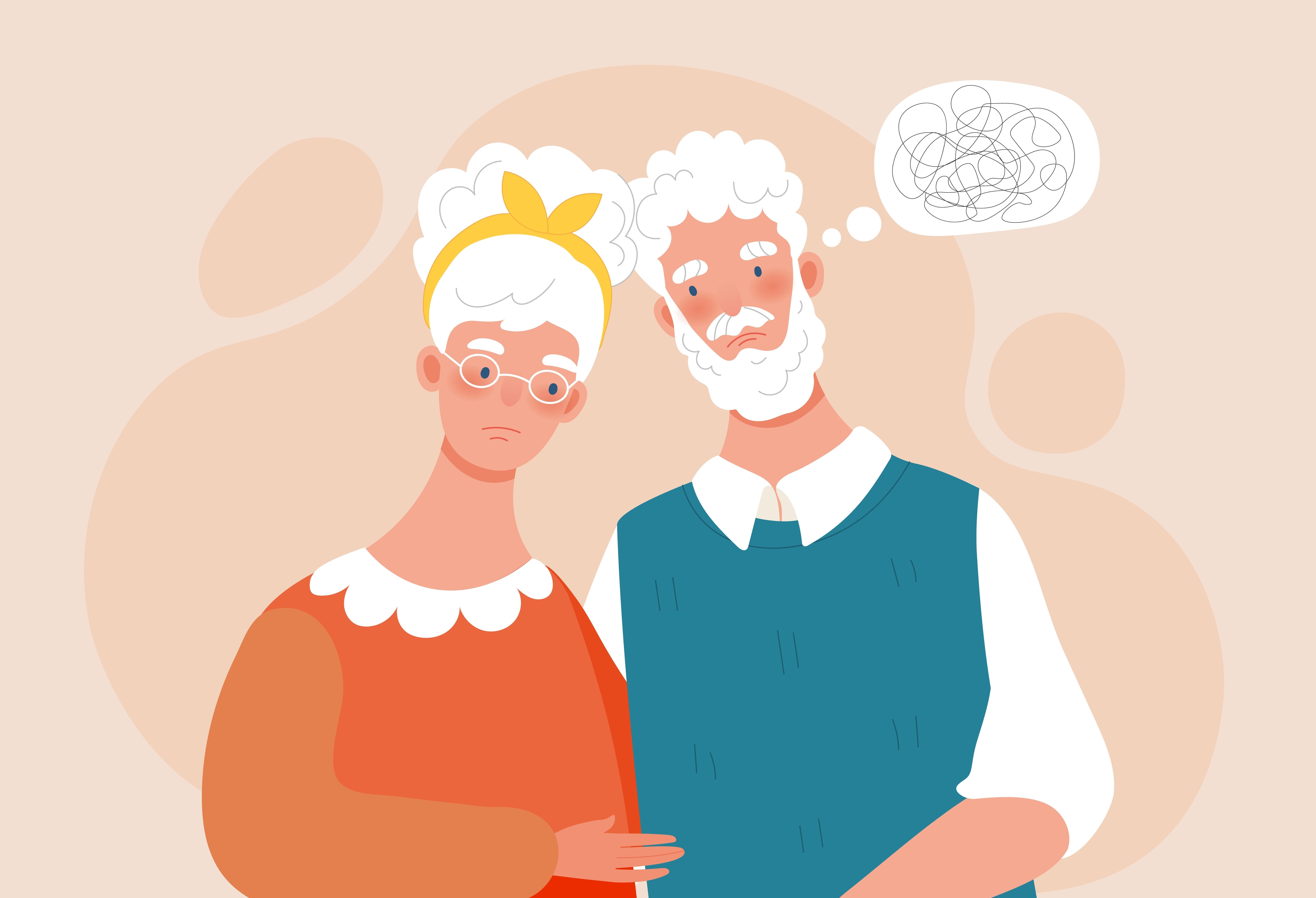 As the pandemic drove the economy into a recession, Americans began to retire at increasingly higher rates — a major shift from previous recessions, when older Americans prolonged their working years to make up for financial losses.[1]

But a rise in retirement rates could mean Americans are missing out on savings. In fact, we found that 56% of retirees wish they retired later — including 40% who regret they didn't save more.

Retired Americans also currently outspend their annual income by just over $4,000.[2] We also found that 75% of retirees hold debt through retirement.

Although over three-quarters (79%) of retirees rely on Social Security to fund their retirement, the average monthly Social Security payment covers only 40% of their monthly expenditures.[3] This means retired Americans rely heavily on other sources of income such as savings or investments for 60% of their their monthly household spending— with some even going into debt to pay for basic expenses.

Still, many of these early retirees aren't leaving the workforce by choice. More than half (53%) of those who retired before they intended cited health issues as their reason for early retirement.

The rocky economic recovery Americans have experienced recently in the wake of staggering unemployment rates and an uncertain financial landscape makes it prudent to ask: Can Americans afford to be financially stable throughout retirement?

To learn more about how Americans are experiencing their retirement years, we surveyed 1,000 current retirees about their retirement finances, debt, and financial security. We learned that most retirees don't have enough to cover the costs of retirement and expect to outlive the entirety of their savings.

With millions of Americans facing financial insecurity during their golden years, the nation may be on the brink of a retirement crisis.

The Average Retiree Has $191,659 in Retirement Funds — Just 37% of Recommended Savings

In fact, we found that only about 1 in 3 retirees (38%) actually have enough saved for retirement — and 30% of retirees have nothing in savings.

With limited funds at their disposal, it's no surprise that nearly two-thirds of retirees (64%) feel financially unprepared for their retirement.

The COVID-19 pandemic has not only posed significant health risks for older Americans but has also put their finances on the ropes as well, as 48% of retirees report the economic downturn impacted their finances. Of those retirees, nearly half (49%) say their finances still have not recovered.

More than three-quarters (76%) of retired Americans have some debt. The most common forms of retiree debt include:

As lockdowns lifted and vaccination rates increased in 2021, however, we found a glimmer of hope for retirees' financial recovery.

Three-quarters (75%) of retirees still experience looming debts and many struggle to pay their bills, but the average amount of debt retirees hold has decreased by 12% between 2020 and 2021. Retired Americans reported having an average of $17,136 in debt, down from $19,200 in 2020.

Retirement is a major source of stress and anxiety for many Americans.

Nearly one-quarter (24%) of retirees feel stressed about their retirement, while almost half (45%) say they waited too long to start saving for retirement.

Unsurprisingly, more than three-quarters (79%) of retired Americans rely on Social Security as a source of income. But the average monthly Social Security payment is just $1,555, covering only about 40% of the mean $3,843 retirees spend per month.[2][3]

This disparity leaves some to rely on personal savings or other sources, but retirees aren't confident they have enough: 51% of retirees believe they'll outlive their savings entirely.

Common sources of retirement income include:

In addition to income sources such as Social Security and savings, nearly 1 in 10 retirees (7%) work part-time, and 3% consult or run a small business to cover their expenses.

Of those who work during retirement, 73% say they need the money for basic living expenses or additional discretionary income.

Those who reported having part-time employment, running their own business, or consulting do so for the following reasons:

54% of Retirees Say Their Employers Didn't Help Enough With Retirement

Contributing to a 401(k) plan can be one of the best ways to save for retirement considering these plans are pre-tax.

But nearly one in three retirees (31%) say their company didn't offer 401(k) plans or pensions — and only 29% of retirees report that their household wealth consists of a company- or employer-funded pension plan.

Even when companies helped employees with retirement savings, 54% of retirees say their employer didn't help enough.

For Americans who work for companies that offer these savings plans, a significant number of employees don't contribute enough to get an employer match.[5] This means the average retiree is likely losing out on money when saving for retirement, exacerbating retirees' financial instability.

Whether it's due to horrible bosses or lack of company funds, retirees aren't satisfied with the amount of help their employers gave them for retirement.

43% of Retirees Struggle to Pay Bills

We found that a significant number of retired Americans (43%) struggle to pay their bills, which include:

Additionally, a lack of financial education during their working years has left over half (67%) of Americans with regrets about their savings. Their top regrets include:

This, unfortunately, may be the norm among Americans. The United States ranks 14th in the world for financial literacy, and financial literacy rates are lowest among adults 65 and older across the globe.[7][8]

27% of Retirees Regret Retiring When They Did

Most Americans can't maintain their standard of living into retirement, but 27% of retirees with regrets don't realize this until they've already left the workforce.

The average retired household makes 48% less ($42,044) than the average wage earning household ($88,309), a nearly 50% loss of income.[2] Considering many Americans are living an average of $4,000 beyond their means in retirement, the financial strain of retiring appears to leave many with regret.

Of retirees who regret the timing of their retirement, more than half (56%) say they should have delayed their plans to retire — including 40% who now realize they haven't saved enough. Additionally, nearly 1 in 3 retirees (28%) regret dipping into their savings prior to retirement.

Lack of adequate savings, and the resulting stress, impacts the degree to which retirees can actually enjoy their later years. Since retiring, half of retirees report spending less money on things such as traveling (50%) and dining out (49%), while more than one-quarter (27%) increased their spending on medical bills and health care.

64% of Retirees Retired Earlier Than Planned, With More Than Half Citing Health Issues

Soaring COVID-19 rates and the lingering effects of post-COVID conditions pose increasing risks for older Americans and their families.[9][10] Of those who retired during the COVID-19 pandemic, 48% said the pandemic influenced their decision to retire.

Workers who retired earlier than planned cited these reasons for doing so:

Retiring early or earlier than planned can come with some caveats. As we've learned, Americans are already strapped for retirement cash, but retiring due to medical reasons could exacerbate that financial strain even further.

The average retiree has $11,114 in medical debt, but that sum may only grow over time, as experts predict the average retired couple may need around $300,000 saved to afford health care expenses alone.[11]

There is a silver lining, however. The number of Americans retiring due to health concerns decreased by 12% from 2020, suggesting that we may see the shadow of the pandemic begin to recede in the near future.

The proprietary data featured in this study comes from an online survey commissioned by Clever Real Estate.

1,000 retired Americans were surveyed on November 2, 2021. Each respondent answered up to 20 questions related to their financial situation, retirement preparations, and worries surrounding retirement and financial planning.

Since 2017, Clever Real Estate has been on a mission to make selling or buying a home easier and more affordable for everyone. 12 million annual readers rely on Clever's library of educational content and data-driven research to make smarter real estate decisions — and to date, Clever has helped consumers save more than $70 million on realtor fees. Clever's research has been featured in The New York Times, Business Insider, Inman, HousingWire, and many more.

Unfortunately, 65% of retirees aren't financially secure, and the average retiree has saved only 37% of what experts recommend they have saved before retiring. 43% of retired Americans also struggle to pay their bills, while a quarter of retirees regret retiring when they did. Learn more.

23% of retirees rely on some form of investment to fund at least part of their retirement. A majority (79%) of retired Americans lean heavily on Social Security, and more than half (51%) believe they'll outlive their savings. Learn more.