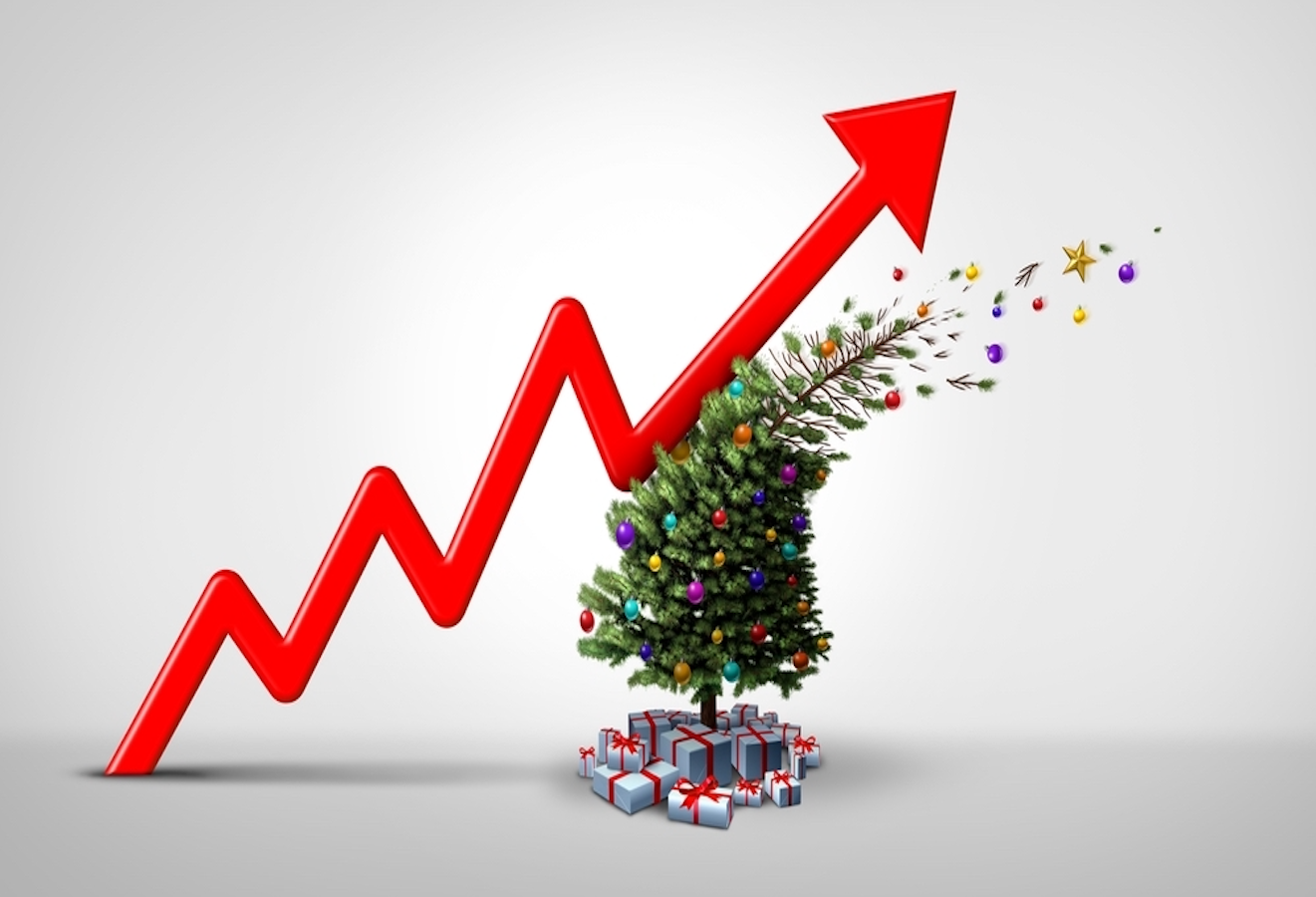 High prices have shoppers feeling frosty about the 2022 holiday season.

As inflation forces consumers to spend more on gas and groceries, about 1 in 3 Americans (34%) plan to spend less on holiday shopping in 2022 than they did last year, according to a new Clever Real Estate poll of 1,000 Americans.

Retailers have taken notice, hosting holiday sales earlier than normal and ratcheting up discounts to move merchandise.[1] Stores want to draw attention to deals now before Americans decide to cut back further on nonessential spending — especially when 58% of the country already reports feeling worried about finances.

A lack of expendable income has consumers tightening their budgets this winter. The average shopper plans to spend $851 on holiday gifts in 2022, down from the $893 they normally report spending.

Read on for more data on how higher prices this holiday season are impacting Americans' shopping and spending.

With the inflation rate near a 40-year high, it's no surprise a majority of Americans (61%) plan to adjust their holiday spending in 2022. In fact, nearly 1 in 10 Americans (9%) plan to skip holiday shopping completely.

Holiday shoppers plan to cut back on their 2022 holiday costs by about $42. On average, they say they'll spend $851 on gifts this year, down from $893 in a typical year. Among those spending less, more than half (57%) cited inflation as a reason they're trimming their budgets.

The main reasons shoppers are cutting back are:

On the other end of the spectrum, about 30% of Americans plan to spend more on holiday shopping than they did last year. Of those spending more, 38% indicate they'll have to spend more because inflation has made products more expensive.

The main reasons some Americans are spending more include:

About 1 in 10 Americans Are Not Planning Any Holiday Shopping

Many Americans who typically shop for the holidays are opting out this winter. About 9% of Americans say they don't plan to do any holiday shopping in 2022.

The most common reasons for Americans not gift shopping include:

Half of Americans Want to Ditch the Gift-Giving Tradition

At a time when nearly 2 in 5 Americans can't afford everyday goods, many see the spending associated with the holiday season as an additional burden.

Over three-quarters of Americans (76%) wish there was less pressure to spend a lot of money on holiday gifts.

Some take that sentiment one step further. Half of Americans (50%) say they'd prefer if gift giving was not a traditional part of the holiday season.

Millennials in particular are channeling Ebenezer Scrooge, with a majority (54%) saying they'd be OK abandoning gift-giving in the Christmas past.

Here is the share of each generation that would support getting rid of gift-giving:

Men are also less attached to gift-giving, with 53% saying they'd give it up compared to 47% of women.

2 in 3 Americans Admit to Overshopping for the Holiday Season

Retailers often employ tricks to get customers to spend more than planned, especially during the holidays.[2] Many consumers struggle to resist deep discounts offered in the season of giving. More than 1 in 3 Americans (37%) say they've gone into debt while holiday shopping in the past.

In addition, 39% of Americans say they simply can't afford holiday shopping this year, but 79% of people who say that plan to shop anyway.

How Americans Plan to Pay for Their Holiday Shopping Sprees

Slipping into debt can be a risk with the "swipe first, ask questions later" mentality that accompanies some Americans' credit card use. Fortunately, shoppers say they'll primarily use debit cards (61%) and cash (51%) to pay for gifts in 2022.

The most common payment methods for holiday shopping include:

Americans Are Getting an Early Start on Holiday Shopping in 2022

As high prices force consumers to cut back on nonessential spending, retailers are holding on to stockpiles of merchandise, with more on the way.[3] With a surplus of goods, stores are advertising deeper discounts earlier than they have in past holiday seasons.[4]

Americans seem to be responding: A majority (52%) are switching up their shopping schedule in 2022. About 39% plan to start shopping earlier than usual — three times as many as the 13% who plan to shop later than usual.

Americans plan to shop for the holidays:

Among the 91% of Americans who plan to participate in holiday shopping in 2022, the vast majority (80%) plan to start before December.

Americans plan to start shopping in:

Nothing persuades consumers to shop more than discounts, so it follows that a majority of Americans will target the biggest discount days of the year: Black Friday and Cyber Monday.

Cyber Monday is actually more popular than its in-person counterpart. Cyber Monday is expected to draw 61% of Americans, compared to 57% for Black Friday, our data shows.

Those who plan to hit stores on Black Friday say they will:

Among the 43% of Americans who plan to skip Black Friday in 2022, the most common reasons for doing so include:

Where to Shop: Americans Favor Major Retailers During the Holiday Season

The most common locations holiday shoppers plan to browse include:

Overall, most Americans say they prefer shopping for gifts in a store (54%) rather than online (46%). On average, women are more likely to say they prefer in-store shopping (57%) than men (51%).

Although online shopping continues to grow in popularity, it's expected to be undermined by inflation and early discounts in 2022.[5] In an example of online retailers going all-out, Amazon held more than one Prime Day for the first time this year in an effort to boost sales.

Supply chain delays have been one of the biggest secondary impacts of the COVID-19 pandemic. To be safe, some businesses even ordered holiday merchandise in the spring.[6]

Despite headlines about supply chain snags, Americans have already grown accustomed to relatively quick delivery when ordering packages online, likely as a result of Amazon's two-day shipping through its Prime program.

On average, half of Americans (50%) expect a package to arrive within four days of ordering, and nearly 1 in 6 (16%) expect it within two days.

People expect their packages within:

Americans have grown to expect shipping that's not only fast — but cheap. About 1 in 8 Americans (13%) say free shipping is the most important thing they look for when holiday shopping.

About 44% of Americans say they would not pay more than $10 in shipping for an item bought online, and nearly 1 in 5 (19%) say they wouldn't pay any money toward shipping.

Americans say the most they'd pay for shipping is:

Americans also carry some concerns that they might never receive their packages once ordered, whether from shipping snafus or porch pirates.

Each holiday season, consumers are inundated with marketing materials from stores as retailers try to bring people inside with sales, coupons, and other strategies.

Americans say they're most likely to shop if:

Asked another way, Americans ranked their most important priorities when shopping during the holidays:

Most Americans Fell Short of Their 2022 Financial Goals

2022 has thrown a lot at consumers. Lingering impacts from the pandemic combined with historic inflation have Americans struggling to hit their financial goals.

Interestingly, only 40% of women say they met their financial goals in 2022 compared to 58% of men.

Feelings About Holiday Shopping and Finances

Americans are approaching the 2022 holiday season with a mix of emotions. Many are trying to find some holiday cheer but still worry about their long-term financial footing.

When it comes to holiday shopping, Americans feel:

Although men and women are about equally likely to say they're excited for the holiday season, women (39%) are much more likely than men (24%) to report being stressed. Meanwhile, men are also nearly 3x as likely to say they feel indifferent about holiday shopping (8% vs. 3%).

That male-female split carries over into how Americans feel about their finances. The most popular answer for men is comfortable (39%), but for women, it's stressed (42%).

Overall, the most common emotions Americans feel about their finances are:

The proprietary data featured in this study comes from an online survey commissioned by Clever Real Estate. One thousand Americans were surveyed Oct. 6, 2022. Each respondent answered up to 21 questions related to holiday shopping and personal finance.

Since 2017, Clever Real Estate has been on a mission to make selling or buying a home easier and more affordable for everyone. 12 million annual readers rely on Clever's library of educational content and data-driven research to make smarter real estate decisions, and to date, Clever has helped consumers save more than $82 million on realtor fees. Clever's research has been featured in The New York Times, Business Insider, Inman, Housing Wire, and many more.

Many Americans plan to start Christmas and holiday shopping earlier than normal in 2022. About 80% of shoppers plan to start shopping for gifts before December. Learn more.

About 61% of Americans plan to adjust their holiday shopping because of inflation, and about 9% say they don't plan to do any holiday shopping. Learn more about how higher prices this holiday season will affect shopping.