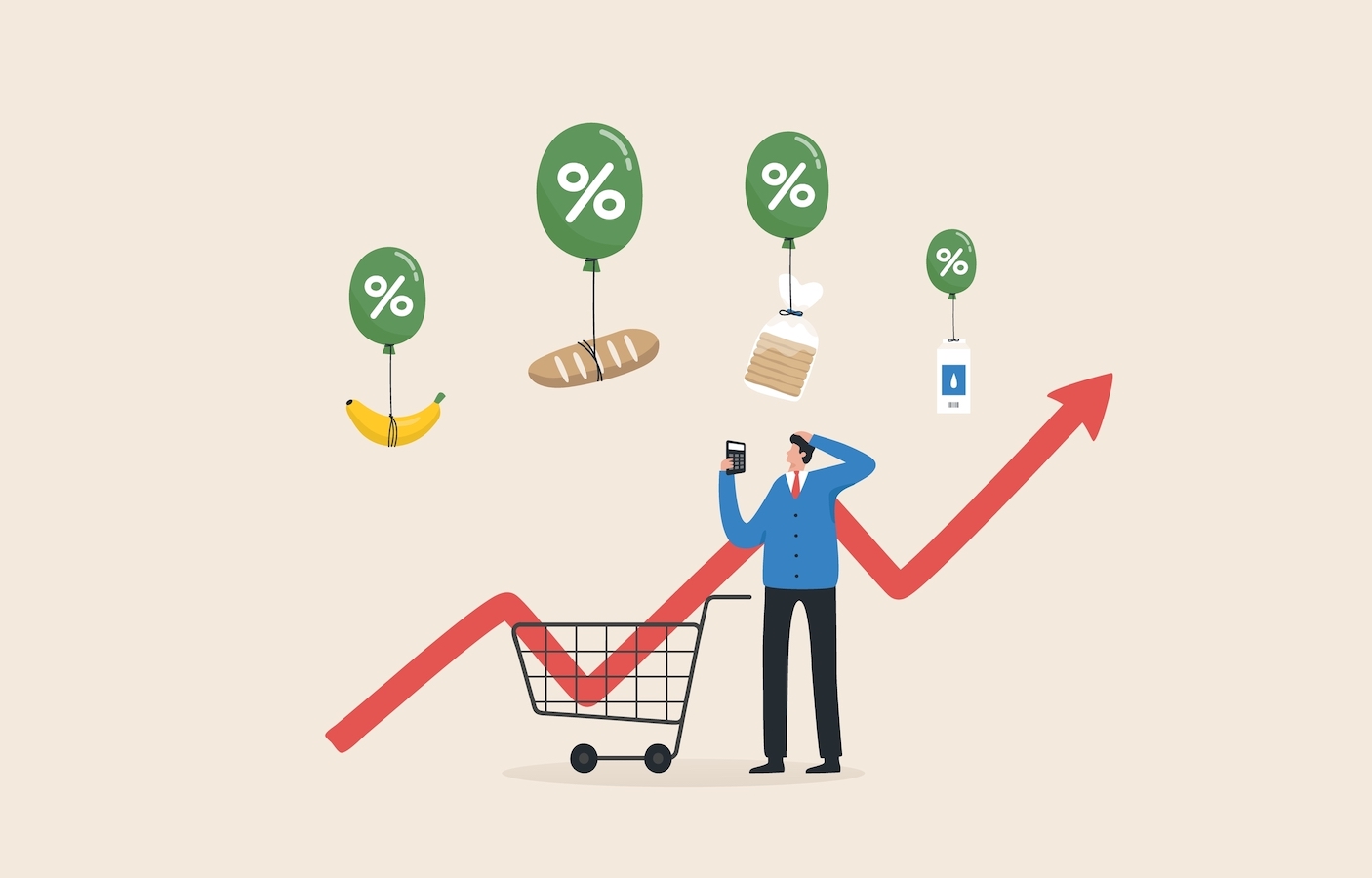 Inflation Ranked Most Concerning Issue | Americans Expect Inflation to Last | Wages Not Keeping Up | What Americans Get Wrong | Who Deserves Blame? | How Americans Suggest Fixing Inflation

Americans rarely see eye to eye on important issues. But in 2022, they've found something to agree on: 4 in 5 Americans (78%) say the high rate of inflation has become a crisis.

After nearly a decade of inflation rates hovering between 1% and 3%, inflation reached 9.1% in June — the highest mark since 1981 — before settling at 8.2% in October. Americans are well aware of the problem. About 92% say they've cut costs in 2022.

No matter what (or whom) they blame for inflation, consumers remain deeply pessimistic about the issue, according to a new Clever Real Estate poll of 1,000 Americans. In fact, 2 in 5 Americans (40%) believe the current rate of inflation is here to stay permanently.

Read on for more data on American attitudes, worries, and misconceptions about inflation.

Americans Rank Inflation as the Most Concerning Issue Facing the Country

Americans rank inflation as the No. 1 issue facing the country, followed by health care, crime/gun violence, and abortion.

About half the country (47%) ranks inflation as one of the top three issues, with 23% ranking it No. 1 out of 10 choices. On average, Americans rank the following issues, in order of most concerning to least concerning, as:

Our analysis also examined answer choices among respondents with liberal and conservative political views. For left-leaning respondents, inflation ranked No. 3, behind health care and abortion/reproductive rights.

Right-leaning respondents say their top issues are inflation, immigration, and government spending. Inflation is the only issue that ranks in the top three for both conservatives and liberals.

Most Americans Expect Inflation to Be Worse in 2023

Not only do Americans expect inflation to continue in 2023, they also expect it to get worse. Nearly 2 in 3 Americans (62%) say they expect the cost of everyday goods to rise in 2023. Only 12% expect prices to decline.

High gas prices have not gone unnoticed, either. The national average reached an all-time high of $5.11 per gallon in June and has since declined to about $3.90.[2]

Consumers are skeptical those prices will continue to fall. About half of Americans (47%) expect gas prices to increase in 2023, and just 24% expect them to decline.

Only 1 in 4 Americans (26%) believe the overall economy will get better in the next year, and just 25% expect stock values to rise.

Americans don't seem to think relief is just around the corner.

About 40% of Americans say elevated rates of inflation will be permanent. That's more than the 35% who say the current level of inflation is temporary. The other 25% say they don't know when inflation rates will subside.

In other words, only 1 in 3 Americans are confident inflation will subside eventually. Historically, extended periods of inflation aren't unheard of. The last time inflation rose above 8% was in September 1978, and it didn't drop below 8% until February 1982.[1]

Costs Are Rising, But Only 1 in 3 Americans Are Earning More Money

A staggering 93% of Americans say they have cut costs amid inflation in 2022. Yet fewer than half of them (37%) have seen their household incomes rise.

Talk of a recession has drawn headlines for much of the year. Although the definition of recession leaves some room for interpretation, about 2 in 3 Americans (68%) say one is on the way.[3]

In fact, 53% of Americans say the economy is already in a recession, including 48% of liberals, 50% of moderates, and 64% of conservatives.

Given the state of the economy, under a quarter of Americans think now is a good time to buy a home (22%) or start a family (23%).

How Americans Are Cutting Costs

Nearly all Americans (93%) have cut costs in 2022 and are using several tactics to save money amid inflation. They have:

About 2 in 5 Americans Say They Can't Afford Everyday Goods

High prices have clearly put a dent in Americans' budgets. About 38% say they can't afford everyday goods, and most (53%) say they don't make enough money to live comfortably.

To help weather inflation, more than 7 in 10 Americans (71%) support a fourth stimulus check from the government — with liberals (80%) more likely to support the idea than conservatives (60%). However, there's evidence that more payments could make inflation worse.

Stimulus checks and similar spending measures may have added "about 3 percentage points" to the national inflation rate, according to the Federal Reserve Bank of San Francisco. (Though, the agency notes not spending that money could have led to deflation and other economic consequences.)[4]

The support for an additional stimulus check comes at a time when 97% of Americans say they've noticed everyday goods getting more expensive.

According to respondents, the most common items that cost more are:

Americans (Wrongly) Say Inflation Is at an All-Time High

Although Americans are feeling real pain from inflation, many are a little too confident that they understand inflation's scope. In fact, nearly 2 in 3 Americans (64%) wrongly believe inflation is the highest it has ever been in the U.S.

Similarly, about half of Americans (46%) claim to know the current inflation rate, but only 25% actually do. In September (when the survey was conducted), the inflation rate was at 8.3%, but the average respondent thought it was 12.8%.

All together, Americans are about six times more likely to overestimate (65%) than underestimate (11%) the inflation rate.

What Do Americans Think the Inflation Rate Should Be?

Many economists suggest an inflation rate of 2% to 3% is ideal because it can drive economic growth.[5]

Only 28% of Americans say inflation can be a good thing for the economy, but most proposed notably high percentages. In fact, the average suggested rate was 8.1%. If that were the case, the current 8.2% inflation rate would be little to worry about.

Other data in our survey is consistent with Americans' misunderstanding inflation. As we'll touch on below, about 1 in 10 Americans say printing more money would be a good way to reduce inflation.

What (and Whom) Do Americans Blame for Inflation? It Depends on Their Politics

The most-blamed causes of inflation are:

Among conservatives, the most blame is assigned to:

Meanwhile, liberals are much more likely than conservatives to blame the Russian invasion of Ukraine (55% vs. 34%), and they are twice as likely to blame businesses trying to profit (37% vs. 20%).

Among liberals, inflation is most attributed to:

Although most Americans blame inflation on the pandemic to some extent, about 55% of respondents still say the current inflation situation was preventable as opposed to unpreventable (23%).

Governments have some tools to address inflation, but there's little consensus among economists whether inflation can be avoided altogether.[6] As for its causes, some experts point to fallout from the pandemic and criticize the Federal Reserve for keeping interest rates low.[7]

It's worth noting that inflation is not a uniquely American problem in 2022. For example, the European Union is experiencing an inflation rate of about 10%.[8]

Americans Answer: Who Benefits From Inflation?

Curiously, Americans are more likely to say politicians in office benefit from inflation (36%) compared to political candidates running for office (27%).

Overall, Americans are most likely to say that wealthy people (44%) and large companies (44%) benefit from inflation.

Among those who benefit most from inflation, experts point to energy providers, such as oil companies, and anyone paying off existing debt at a fixed interest rate.[9] So some homeowners, for example, end up paying less toward their mortgage than they would have had their interest rate moved with inflation.

How to Fix Inflation? Americans Differ on Ideas — Many of Them Bad

To curb inflation, economists often suggest raising interest rates and, in some cases, higher taxes to slow demand for goods and services.

The American public, however, is not particularly united on how to halt inflation, with no answer choice below getting more than 40% of respondents' support.

Some of the solutions, such as reducing spending or raising interest rates, are often brought up as potential fixes. However, 1 in 10 Americans wrongly think printing more money will reduce inflation.

The support for questionable solutions doesn't stop there. Sizable shares of Americans say the U.S. should cut taxes (28%) and decrease interest rates (19%) — both of which experts warn would likely lead to more inflation.[10]

Among Americans, the most common suggestions to reduce inflation are:

The top solution among right-leaning respondents is electing different politicians, suggested by 46% of conservatives but just 25% of liberals.

The most popular solution among left-leaning respondents is the end of the Russian invasion of Ukraine (41%).

In addition, liberals (36%) are about twice as likely as conservatives (17%) to say the Inflation Reduction Act will help curb inflation and three times as likely to say tax increases will help (19% vs. 7%).

What Inflation Means for 2022 Midterm Elections

Rising costs will be on the minds of many in the voting booth this fall. Among Americans who plan to vote in the 2022 midterm elections, 74% say inflation will play a part in how they vote.

Meanwhile, about 49% of respondents who identify as apolitical say they do not plan to vote, followed by 12% of moderates, 5% of conservatives and 5% of liberals.

Whether discontent over inflation will actually swing election results remains to be seen. At the federal level, the party in power usually loses seats in Congress, and Americans are already twice as likely to say they're personally doing worse financially since Biden took office (40%).[11] Only 17% say they're doing better.

Inflation has dominated headlines in 2022, and Americans feel the attention is justified. They are about twice as likely to say inflation hasn't gotten enough media coverage than they are to say it has gotten too much coverage.

Like many of our data points, opinions of media coverage vary based on respondents' political views. Conservatives (47%) are twice as likely as liberals (25%) to say inflation hasn't gotten enough media attention.

The proprietary data featured in this study comes from an online survey commissioned by Clever Real Estate. One thousand Americans were surveyed Sept. 14-15, 2022. Each respondent answered up to 21 questions related to their views on inflation in the U.S.

About 71% of Americans say they would support another stimulus check amid inflation. That includes 80% of liberals and 60% of conservatives. Learn more.