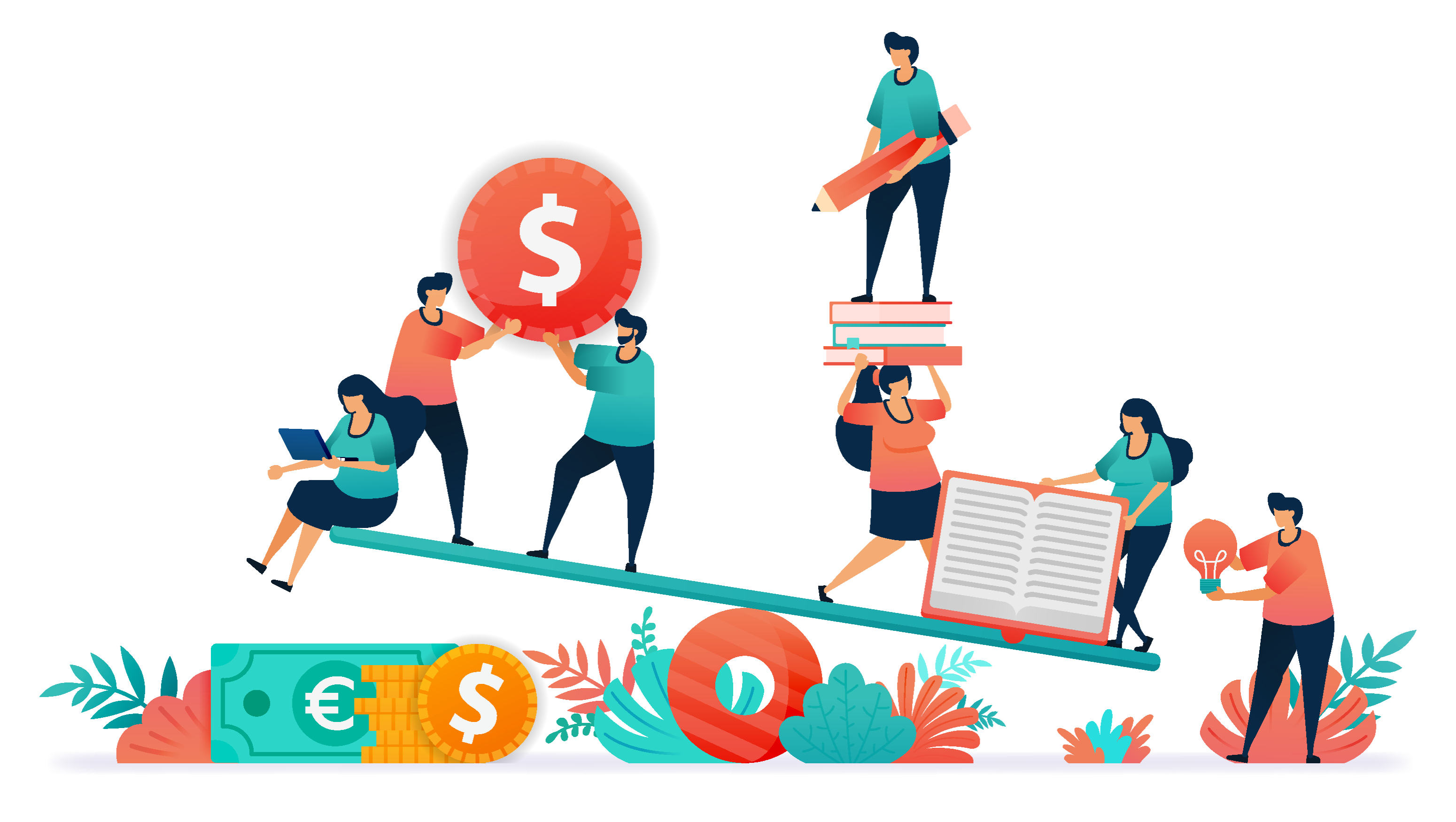 The discrepancy between income and tuition growth over time means that more household income is going towards college, and now over half of families have to borrow to cover those costs.

The high cost of education begs the question:

Are college degrees worth it?

In general, it seems like they are: people with a college education earn more money over their lifetime than people who never attended college, and it’s easier to get a job with a degree. According to the Center on Education in the Workforce, nearly two-thirds of jobs will require some college experience by 2028 and even those that don’t are more likely to go to people with bachelor’s degrees.

The 48% of Americans who have a bachelor’s degree might be on to something, but what about the 13% who have a graduate or professional degree? Those degrees can require an additional 2 to 10 years of schooling before graduates can start earning back the money they spent on their education.

According to our analyses, many graduate degrees might not be worth the investment as returns diminish the more time you spend in school.

That’s not always the case, of course, but the expense and lack of financial payoff highlight the nuance of choices when it comes to getting a college education. We’ll dive more into this later.

To explore variations within degree types — specifically bachelor’s degrees — we created a ranking system to determine the best majors based on return on investment (ROI), job opportunity, and job meaningfulness using data from PayScale, the Bureau of Labor Statistics, and College Scorecard.

See the methodology section for more detail about our data and how we calculated these metrics.

We ranked majors based on their return on investment, opportunity growth, and meaningfulness. We included all three metrics to establish a prediction of job satisfaction and stability.

More specifically, we chose return on investment because college not only costs a lot, but also takes many years to complete. With the rising cost of college and student debt, obtaining a college degree should lead to larger returns than what is lost by attending college.

Opportunity growth — or the growth in job availability through 2028 — was included to provide a metric of a graduate's ability to obtain a job after college, as well as his or her ability to growth professionally overtime.

Both return on investment and opportunity growth are related to financial well-being, but we also wanted to highlight the importance of having a meaningful career. People who find meaning in their jobs tend to be more engaged at work and are more satisfied with their jobs than those who don't.

The cost of an undergraduate degree doesn't differ much by major but income after college does, leading to large variations in returns on investment. Many of our best majors, for instance, have relatively high ROIs.

While most of our worst majors have lower ROIs than our best majors, that's not always the case. Polymer / plastics engineering, for instance, has an ROI comparable to that of our top 5 majors.

If we only consider ROI, city / urban, community and regional planning; petroleum engineering; nuclear engineering; biopsychology; and biological and physical sciences take the cake. Each of those majors has an ROI over 269%, so students with those degrees earn at least $3.9 million more in their lifetime than someone with a high school diploma after paying for school.

On the other hand, the lowest ROIs go to social work, nutrition sciences, real estate, human services, and religion / religious studies. A religion major might only earn an extra $230,000 in their lifetime than someone who didn’t go to college.

A major’s return on investment isn’t the only characteristic people should consider when deciding upon a major, though. The ability to get and keep a job in a related field after graduation could reduce financial and emotional stress in the future.

The #1 major on our list also has the most job growth projected through 2028 at 18%. Many engineering majors — which typically result in a high monetary payoff after graduation — have low projected growth.

Slow growth in some of these engineering areas (like electrical engineering) is consistent with previous projections by the BLS. And some suggest that many of the engineering jobs are experiencing slower-than-average growth in America because companies are moving to contracted labor or hiring overseas.

Those who spend more on their bachelor’s degree find their jobs more meaningful according to our analyses. So people who want to find more meaning in their careers might be more willing to invest more without expecting (or seeking) monetary returns.

Gerontology has a relatively low ROI — especially compared to the rest of our top 5 majors — but landed the #5 spot on our list because nearly 80% of people in jobs related to gerontology find their work very meaningful.

More generally, majors that lead to “helping” careers tend to have the highest meaningfulness ratings: gerontology, social work, religion, and human services all made the top of the list with nearly 70% or more reporting their jobs are highly meaningful.

Getting a degree leads to higher lifetime earnings than no college education, but graduate degrees diminish returns.

There are two major factors driving the drop in ROI with more education: earnings and debt. Both are related to the amount of time people spend in school either missing out on earnings or spending more money to complete their degrees.

Counterintuitively, people with a bachelor’s degree actually earn more in their lifetime on average than those with graduate degrees. Therefore, even though graduate degrees are more profitable than a high school diploma, spending an additional 2-8 years in college doesn't usually pay off financially.

A PhD in computer science takes an additional 5-7 years to complete beyond a bachelor’s degree, which can cost an additional $176,000 in tuition and loans. That student’s salary would be similar to the student who earned a bachelor’s degree in computer science, but the ROI equates to about 103% because the PhD is in more debt and will likely spend fewer years earning money unless they push off retirement.

That's not always the case, though. Some graduate degrees lead to higher income; in fact, with an ROI of 235%, a master’s degree in computer science is more profitable than a bachelor’s or PhD.

And professional degrees (like law or medicine) have higher ROIs than most doctoral degrees. Our analysis of various professional degrees showed that the largest ROI is attributed to medical degrees, with doctors earning 400% more over their lifetime than the typical high school graduate (despite the high cost of medical school).

The second factor impacting the ROI of graduate degrees is debt. The longer people are in school, the more money they borrow to cover the costs and interest costs balloon with increased debt.

Here we were conservative in considering a 10-year repayment on those loans, but the typical borrower spends over 20 years repaying their student loans. In that case, interest would be much higher than we have depicted here for the average student.

In conjunction with borrowing more, higher interest rates are applied to loans borrowed for graduate school and interest starts accruing when the loan is borrowed instead of after graduation. That means graduate students are earning more interest even at the same loan amount and they're building up that interest for longer, driving those costs up even more.

While there seem to be overall diminishing returns with each additional degree, we did find that people tend to find more meaning in these degrees. This and other research suggest a tradeoff exists between pay and meaningfulness such that people are willing to work for less if their job is more meaningful.

Is It Worth It?

As mentioned, all college degrees lead to higher earnings than a high school diploma and many find their careers to be meaningful. Long-term job satisfaction and security could be considered priceless when it comes to a career.

It’s also possible to take opportunities to make a degree more fruitful while in school. We used average tuition costs based on published prices collected by College Scorecard but actual costs are typically lower due to financial aid, scholarships, grants, waived costs, etc. that are not required to be repaid.

Over 40% of full-time college students take on jobs to help pay for school or pay for cheaper living arrangements off campus. This can improve a major’s ROI greatly.

The ability to reduce costs is especially true for graduate students. Many doctoral students receive a stipend and have waived tuition and/or fees to offset the cost of education and provide some earnings while in school. Those benefits vary by major and university, but are often in place. Master’s degree students can sometimes find similar ways to reduce tuition.

So the answer to the question of whether college degrees are worth it is “sometimes.” Most bachelor’s degrees and some graduate degrees seem to pay off in the long run. When you consider that many people who obtain doctorates aren’t looking for a monetary payoff, but a means to an end to get the job they really want or to land an academic job, it becomes clear that returns are about more than money.

We used three major metrics to define the best and worst majors: return on investment, job opportunity, and job meaningfulness. You can download our data here.

Here’s how we defined each metric:

Return on Investment: We defined ROI as the net lifetime earnings for each major as compared to the lifetime earnings without a degree. This calculation allowed us to consider earnings, the cost of education, and opportunity cost.

We calculated net lifetime earnings by using data from the BLS on median annual earnings for occupations related to each major using the SOC-CIP crosswalks. We then multiplied that number by the average number of years those people would be in the workforce (48 minus the average number of years to complete the degree). We then subtracted the cost of education from that total.

The cost of education was calculated as the interest paid on loans if the loans were paid off on a 10-year schedule. We calculated this using the monthly payment from the Department of Education’s College Scorecard data and multiplied by 120 months to get a total payment over the course of the loan. We then subtracted the median debt amount from that price to calculate typical interest for each major / occupation.

Job Opportunity was BLS projected job growth between 2018 and 2028.

Job meaningfulness was defined as the percentage of people in each major category who believed their job is very meaningful. These data were gathered from PayScale. Majors / occupation categories from PayScale were matched with majors from the BLS and College Scorecard data using natural language processing (FuzzyWuzzy) programs in Python. Those that did not have good matches were matched manually by the research team.