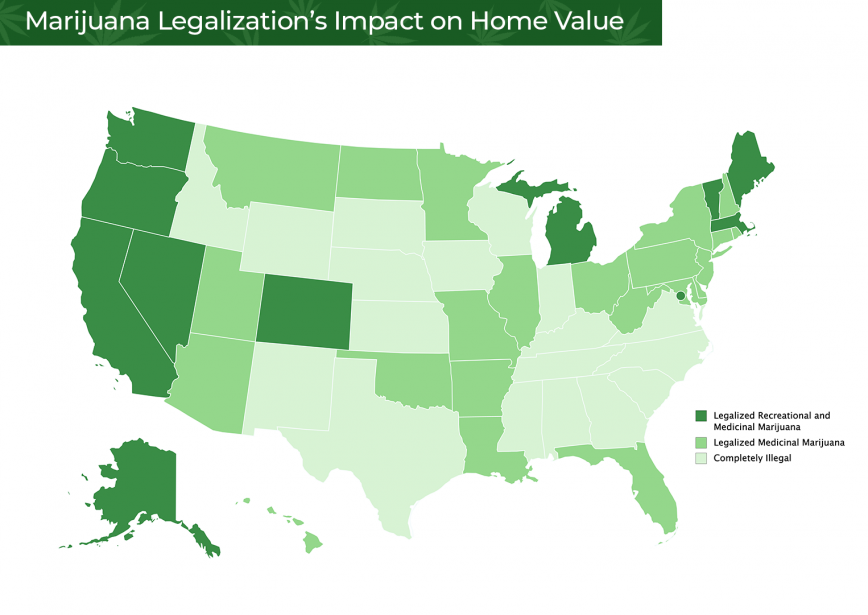 Recreational marijuana legalization is a hot-button topic, and the debate is now entering the real estate industry. With more states legalizing recreational use, every home buyer needs to know how housing markets are affected by this cultural shift. Opponents of legalization stress increases in crime that lead to lower property values, while supporters highlight the potential economic benefits. We decided doing a deep dive into the available MLS data and combining it with dispensary license data was the only way to settle the debate.

Digging into Zillow's historical home price index[1] we can shed some light on these questions (more information on our methodology can be found here).

Public concern around legalizing recreational marijuana usually focuses on elevated crime rates. Elevated crime rates lead to lower property values and poor real estate investments, so the narrative goes. In fact, 42% of Canadian's believe a cannabis dispensary will have a negative impact on local home values according to a 2018 study[2].

Our research reveals the opposite is true: On average, in states where recreational marijuana is legal, cities with retail dispensaries saw home values increase $22,888 more than cities where marijuana is illegal from 2014 to 2019. Per a CATO Institute study[3], homes close to retail dispensaries (within 0.1 miles) increased in value approximately 8.4 percent compared to those further away. This effect appears to bring up the entire city's home values at a rate higher than the national average. Real estate agents can use this data to encourage home buyers that are scared off by retail dispensaries near their homes; based on the research, retail dispensaries don't impact home values like liquor stores.

Colorado’s first retail dispensaries opened in January 1, 2014, and medical and recreational sales have generated over $948,000,000 in tax revenue[4] . Denver has 180 dispensaries[5], the most of any Colorado city, and its housing market has seen unprecedented growth since recreational legalization in 2012.

Since Denver retail dispensaries opened their doors in January 1, 2014 residential property values have increased 67.8%, the most significant growth in over a two decades.

While there are tax benefits to legalizing marijuana medicinally, there was not a statistically significant increase in cities where only medicinal marijuana is legal.

So, why does recreational legalization and retail dispensaries lead to homing price boosts? According to a 2017 study from the University of Mississippi, recreational legalization "attracts more home buyers, including marijuana users as well as entrepreneurs and job seekers." Businesses start to pop up, and job seekers flock to these cities, driving up the demand for housing and retail space.

Takeaway #2: The Connection Between Cannabis Legalization and Crime is Still Hazy

There’s no denying it: Colorado has seen a steady uptick in crime since 2012[6]. Violent crimes in Colorado have increased 25 percent since 2013 after an initial bump in crime in 2012.

Similar violent crime trends can be seen in Washington since recreational marijuana was legalized. And at first glance, these statistics are disconcerting.

While the changes in crime rate are consistent with national averages, one point worth noting is both Washington and Colorado saw increases in violent crime from 2016 to 2017, where the crime rate slightly dropped nationwide. 2018 will be a pivotal year in the debate over whether legalizing cannabis has an impact on crime rates, but more data is needed.

The increase of crime in these areas (regardless of attribution) does not have an impact on housing prices. Legalizing cannabis for commercial sale allows for taxation and measurable economic growth, and investors and the housing markets respond accordingly.

Using Colorado and Washington as case studies, it’s clear that the market benefits from marijuana legalization outweigh the potential costs in terms of home values. Further research in different markets over longer time tables is needed to determine true causality between marijuana legalization and crime (this study will be updated when 2018 crime statistics are released).

While the correlation between cannabis and crime remains hazy, the positive effect on housing markets can’t be denied.

In addition to higher home values, home sellers in Colorado and Washington have enjoyed fewer days on market compared to the national average, particularly in the last few years. Following legalization in 2012, there was a significant decrease in days on the market for both states.

Recreational Cannabis Legalization Leads to an Initial Bump in Home Values, Even Without Commercial Sales

Another key finding is that marijuana has a clear impact on property values immediately after it’s legalized for recreational use. Given the slow nature of the American political system, bills take time to become law, and it can be years before the first recreational dispensaries open their doors. Many states that approved recreational marijuana still haven't passed measures to have regulated and legal markets for commercial sales.

California, Maine, Massachusetts, Michigan, and Nevada all approved recreational marijuana legislation in 2016, but only California, Nevada, and Maine allow for commercial sales.

Interestingly, all of the states that legalized in 2016 saw above average home values immediately after their respective bills were passed.

Silicon Valley’s housing market has been red hot for years, but after legalizing recreational marijuana, Silicon Valley experienced the highest percentage growth in years. Cities like Los Altos, Palo Alto, and Saratoga that experienced minor home value declines in 2016 rebounded in 2018 with record breaking home sale prices. 2018 saw the highest percent increase across the valley since 2014.

One outlier worth discussing is Washington D.C. While the capital legalized recreational cannabis with Initiative 71in 2014, commercial sales are not legal. Residents are allowed to grow and maintain up six plants and carry up to two ounces of marijuana, but no exchange of money or goods is allowed. There are restrictive laws on consuming marijuana: smoking in a public space is a $100 fine and smoking in a parked car can result in a DUI.

The lack of a regulated market has resulted in slower growth for the D.C. area compared to the national average. If cannabis sales aren’t legal, money won’t flow back into the market, and housing prices won’t respond over the long term. Investors might initially jump at the opportunity, but until a legitimate market is established, true market gains can’t be realized.

Investing in a housing market after recreational legalization is a safe bet. Real estate investors should look for areas where commercial licenses for marijuana have been requested, as homes within close proximity to dispensaries tend to have higher home values. Of course, bureaucratic red tape can slow progress and delay property value growth.

Download the analysis to see the different models run.

For specific questions about our analysis email thomas@movewithclever.com.