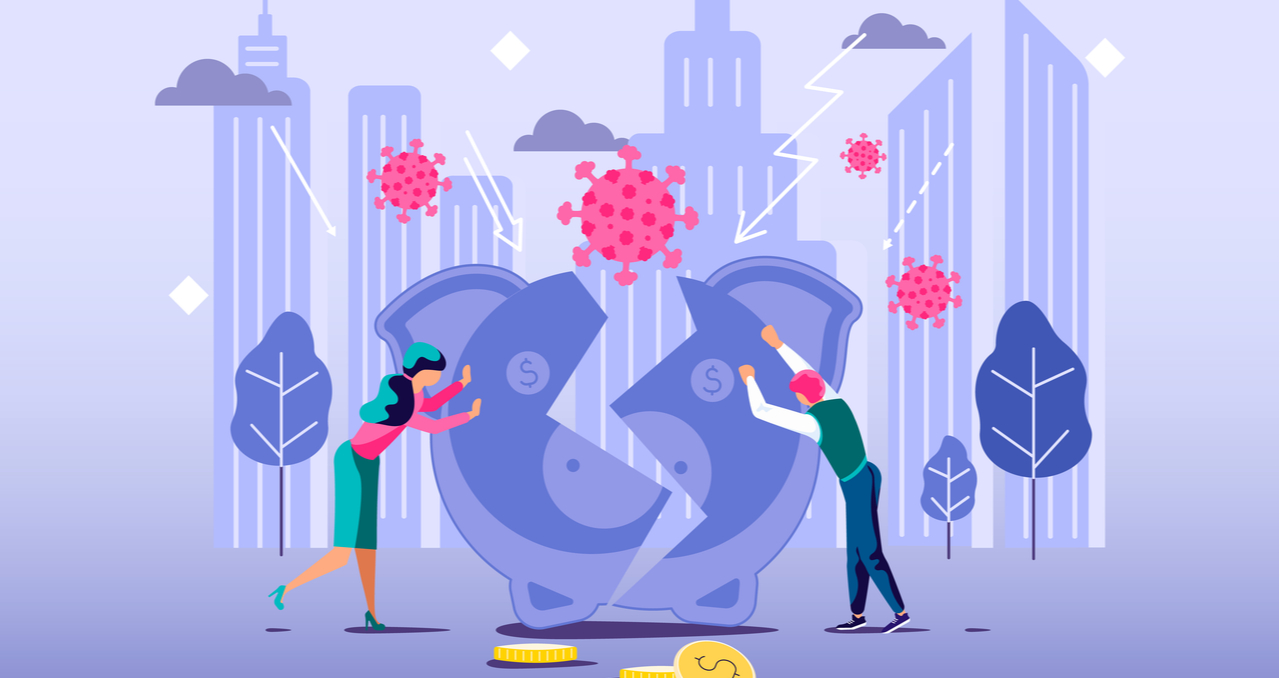 Nearly 30 million people have lost their jobs between mid-March and the end of April. In response to the economic turmoil caused by the spread of COVID-19, the federal government initiated the CARES Act.

Many received or are slated to receive a stimulus check up to $1,200 and unemployment benefits include an extra $600 per week on top of state-funded unemployment for those who qualify. Those adjustments could make dealing with financial instability more tolerable for the time being.

Due to the unprecedented fallout of the novel coronavirus, Clever Real Estate launched our COVID-19 Financial Impact Series, wherein we temperature check Americans’ financial health at the end of every month during and after the lockdown. With millions of Americans impacted by COVID-19, we want to understand how financial and real estate markets will be affected.

Last month, in our March report, we found that many people were struggling to make ends meet due to lost or reduced wages.

Since we published that report on April 6, 2020, when 1.25 million people were affected worldwide, over 2 million additional cases have been reported (as of April 30) and deaths have skyrocketed to over 233,000.

This month, we surveyed 1,000 homeowners and 1,000 renters on April 28 as the second installment of our monthly report to assess how people are continuing to be affected by the coronavirus outbreak and related economic impacts.

The early signs were troubling in that many Americans didn’t have enough in emergency savings to cover a month of expenses. There were also hints of a slowing real estate market as homeowners planning to sell began to pull homes off the market and potential buyers were holding off.

This month is no different:

40% of those who lost their jobs are receiving unemployment benefits, but half say it’s not enough to cover their expenses.

Prospective buyers were 5.5x more likely to put a hold on their home buying plans for “the foreseeable future” than those we surveyed last month.

Home buyers are struggling to afford their down payment, and renters, on average, are in a worse financial situation than homeowners.

New federal regulations intend to provide more assistance to Americans who have lost their jobs as a result of the coronavirus outbreak. As part of the changes, more people can qualify for unemployment insurance and some can receive an additional $600 per week on top of the benefits they receive from their state.

More than 30 million Americans filed new claims of unemployment (i.e., they recently lost their jobs) between mid-march and April 25. Over 40% of respondents said they’re currently receiving unemployment benefits. Half of them said it’s not enough to cover their expenses.

Roughly 20% of respondents have applied for unemployment benefits, but they haven’t received payment yet.

The delay in receiving benefits highlights a problem with so many people applying for benefits at the same time. According to NPR, up to nearly half of those on unemployment are still waiting for the extra $600 of federal money and claim that their state benefits just aren’t enough.

Renters Are More Likely to be Living Paycheck to Paycheck

According to a survey by CareerBuilder, nearly 80% of Americans live paycheck to paycheck. Even some who earn over six-figures report struggling to make it to their next paycheck, suggesting that people tend to stretch their finances too thin.

What’s more, people who rent their place of residence are 58% more likely than homeowners to have lived paycheck to paycheck before and since the COVID-19 pandemic outbreak in the U.S.

Americans Believe the Stimulus Check will be a Huge Help Financially

Only 27% of the respondents in our survey said that they don’t plan to apply for unemployment benefits, suggesting that the majority of our sample is struggling financially. At the very least, they could use some extra help during this time.

In an additional attempt to help Americans, the federal government has issued a stimulus package that includes a one-time check up to $1,200 per adult. The value decreases for those with higher income, leaving those who need it the most with the most.

Of the people who reported qualifying in our survey, the majority (82%) agreed that the stimulus check would be a huge help financially. This result was surprising considering half of the respondents in our study who are receiving unemployment benefits said it’s not enough.

The perception that the stimulus check will be a huge help is likely due to the fact that many struggled to make ends meet even before the coronavirus outbreak, and more are experiencing financial turmoil now. An additional $1,200 could help pay for a few weeks of groceries or rent for a couple of months.

That is consistent with what people plan to do with their stimulus checks: those who qualified for the check said they’ll use it to pay bills (46%), buy groceries (38%), and pay down debts (23%).

A very small minority (~6%) said they’d use it on discretionary items or to invest.

Homeowners Are Holding on to Their Homes Indefinitely

People who were planning to sell their homes in 2020 have had to make adjustments. Many states have restricted open-houses and the number of people allowed at showings. In short, the ways in which sellers can show off their homes has changed dramatically in the last two months.

These unprecedented changes and uncertainty surrounding the future of the economy has led many homeowners to reconsider selling altogether.

Approximately 25% of those planning to sell their homes this year said they’re putting off selling for “the foreseeable future” — up from only 3.5% last month.

Prospective Buyers Are Pausing Searches for the Foreseeable Future

Many (~84%) prospective buyers said their plans to buy a home this year were impacted by the coronavirus pandemic last month, but the large majority (93%) were still planning to buy.

People seem to have a different outlook on the prospect of ownership at the end of April, though: nearly 40% of potential buyers said they’ve stopped their search indefinitely (5.5x more than last month).

People are concerned about their financial security as a result of the coronavirus outbreak. In particular, respondents said they were concerned about covering unexpected expenses (69%), running out of emergency savings (61%), paying everyday bills (58%), income stability (59%), retirement savings (57%), and getting food on the table (50%).

What people were concerned about, though, differed based on whether they were renters or homeowners.

The renters in our survey reported being concerned about their immediate financial situation. More specifically, they were most likely to be concerned about paying for unexpected costs (74%), running out of emergency funds (67%), paying everyday bills (65%), their income stability (63%), making rent in the coming months (59%), and being able to feed themselves and their family (58%).

Of slightly less concern to renters was their ability to buy a home in the future (53%) and their retirement savings (53%).

Homeowners’ concerns seem to focus more on long-term financial impacts of a potential economic downturn compared to renters, who are more concerned about short-term issues, like feeding their family and running out of money.

Half of Renters Have Less than $500 in Emergency Funds

In the March edition of this survey, we noted that renters were underprepared for the coronavirus outbreak, with many struggling to stay afloat.

People Are Taking on More Debt

Many Americans weren’t financially prepared for an emergency when the coronavirus began to take effect in the U.S. in mid-March. As a result, nearly 25% reported having taken on additional debt only two weeks later.

In line with those findings, Americans who have taken on additional debt borrowed more throughout April.

Less than Half of Americans Are Saving for Retirement

Only 48% of respondents said they were saving for retirement prior to the COVID-19 outbreak in the United States (i.e., mid-March). Of those who had been, nearly one-quarter stopped putting money toward retirement since the outbreak and an additional 20% are still saving, but saving less than they were before.

Unsurprisingly, these data lend more credence to the supposition that homeowners are better off financially than are renters: the homeowners in our study were 36% more likely to have been saving for retirement prior to the outbreak.

The real estate market has been tangentially impacted by the COVID-19 breakout — specifically by the restrictions placed on social gatherings. Many states have rules in place forbidding open houses and restricting the number of people allowed to view homes at the same time.

And, while those changes might cause hesitation for traditional buyers and sellers, it presents an interesting opportunity for investors to buy property at a lower cost.

Over 60% of respondents, however, did not agree.

Of those who didn’t think it was a good time to invest, 55% said it was a bad time because the economy might not recover quickly, and nearly 40% would be concerned with not being able to see the property in person.

While the majority of respondents weren’t keen on the idea of investing in real estate, over 40% said it is a good time to invest.

Those respondents said it’s a good time to invest because home prices are low (55%) and buyers have more negotiating power (46%) and less competition (45%).

The data in this report were gathered from an online survey on April 28, 2020. The only restriction for participation was that respondents were 18 or older, lived in the United States, and were either paying rent or a mortgage on the home in which they lived.

We collected data from 1,000 renters and 1,000 homeowners who each answered up to 21 questions (some were dependent on answers to other questions, so not all respondents answered all of the questions).

You can view the results of the survey for renters here and for homeowners here.