There is a large variance in housing prices across the United States. That’s also true for utilities, groceries, healthcare, and other common expenses. We look at how those staples factor into making certain states the most expensive ones to live in 2019. 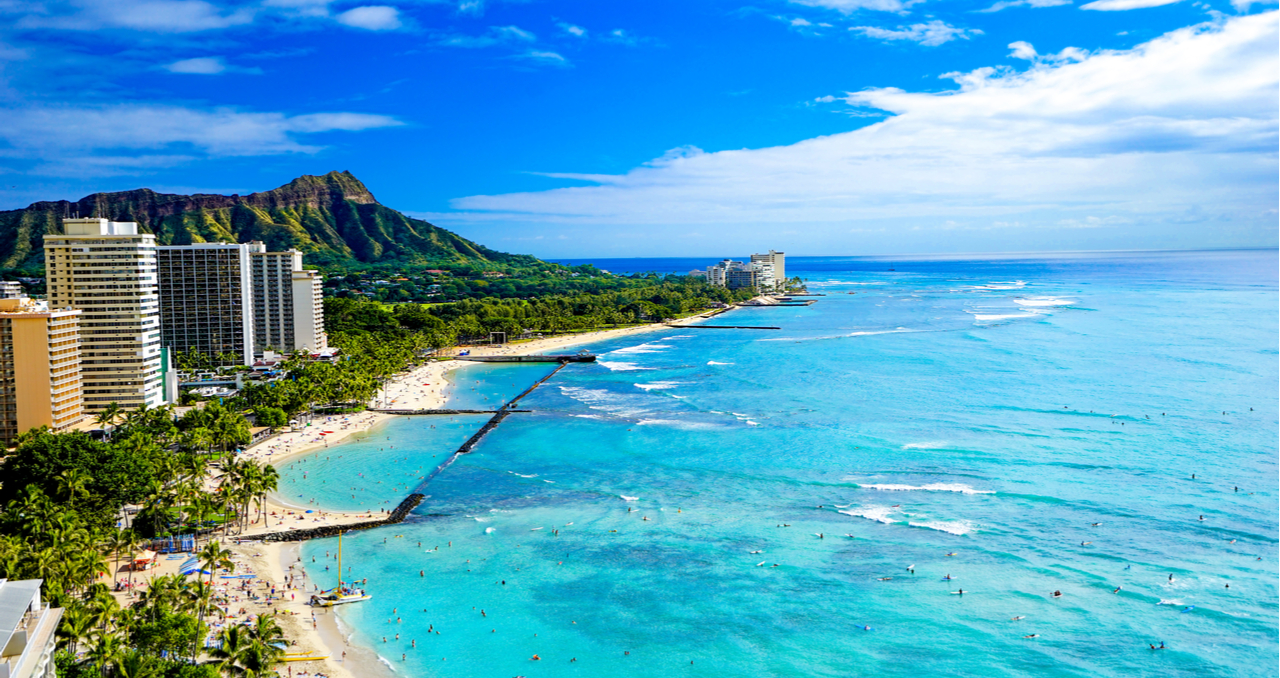 No matter what your definition of “paradise” is, chances are it comes with a hefty price tag.

Whether you long for a rustic Hawaiian beach bungalow or an elegant ski chalet in Colorado, desirable locations across America come with higher living expenses, home prices, taxes, and other costs that add up well above national averages.

But just because these are expensive places to live, you can still find a way to call amazing locations home — especially if you're working with an experienced, local real estate agent who can find you a house in your budget.

Using data and economic research on housing costs (Zillow), living wage (MIT), and median state incomes (GOBankingRates), we dug into what it really costs to live in the most expensive states in the U.S. Check out the average cost of living in these places and alternative locales with more affordability.

To most people in America, Hawaii is a vacation destination. And now we know why: it’s a lot easier to travel there than to call the place home.

The main reason for the high cost of housing is that the state attracts investors from all over the world looking for their piece of paradise. And it isn’t just housing — Hawaii also has the highest electricity and energy bills in the country.

Hawaii’s jurisdiction under the Jones Act makes shipping produce from the mainland more expensive. Put all that together and you end up with a cost of living that’s much higher than most other states in the USA.

> Learn more about the Cost of Living in Hawaii.

If you're just looking to live your best beach life, check out the Florida Keys. While there are still some expensive places in the Keys, there are quieter, less developed islands where you can find a great deal on a home. For example, the median home value on Big Pine Key is a reasonable $439,400.

California is notorious for being a place where even a modest lifestyle can cost you a lot of money. The state’s pleasant weather and wealth of employment opportunities have led to steady growth in population. This, in turn, has caused a spike in property prices, since there is such a voracious demand.

While San Francisco and Los Angeles are notorious for upping the average cost of living in California, even in these cities there are pockets of affordability.

As the state capital, Sacramento offers budget-friendly city living. The average price of a home is closer to $325,000. Plus, it's near several of California's beautiful natural parks providing an escape for nature lovers.

Planning a move to a pricey state? Clever can help!

Buy with a top agent, find your dream home, save thousands.

No one's surprised to see New York on this list. Living expenses in Manhattan never fail to shock tourists from more humble states like North Dakota.

But the city isn't the only area that makes New York state so expensive. While you'll get more for your money in surrounding suburbs, it's not uncommon for homes in areas like Scarsdale to go for over a million dollars.

You could argue for days over whether Chicago or New York is the better city, but one thing is undeniable: Chicago is more affordable. The median home value in Chi-town is $226,400. If you're looking for big-city living, Chicago offers it for less.

> Check out our list of the Best Neighborhoods in Chicago.

If you’re having a laugh at the high cost of living in New York from the other side of the Hudson, slow down. New Jersey consistently figures near the top of lists of the most expensive states in America.

This is partly owed to the fact that New Jersey is the most densely populated state in the country. There is a high demand for housing and other services in general, which has driven up prices in the state. On top of that, New Jersey has some of the highest property taxes in the country.

Pennsylvania offers professionals convenient commutes to other major cities like New York and Washington, D.C. but for less. The median home value in Pennsylvania is $173,800. Plus, Pennsylvania has lower sales and income taxes than New Jersey.

Even for renters, Massachusetts is expensive. According to the National Low Income Housing Coalition, at minimum wage, you would have to work 113 hours a week to live in a two-bedroom apartment.

The perpetual demand for housing with a low supply is to blame for the exorbitant home and rental prices, particularly in Boston.

Massachusetts also has higher than average sales tax at 6.25%. With an effective real estate tax rate of 1.22%, you'll also pay almost $5,000 a year in property taxes on a home worth the state median value.

Just to the north of Massachusetts, it takes about an hour to get from Boston to the state border. Once you cross into the Granite State, median home values drop to $278,000. Plus New Hampshire has no state sales or income taxes.

> Learn more about Buying a Home in New Hampshire.

Home prices in Connecticut can vary dramatically. While towns like Greenwich have homes well over a million dollars, other metro areas like Hartford and New Haven have median home values under $175,000.

However, the entire state is subject to Connecticut's high property taxes — the state has the 4th highest real estate tax rate in the country. In a survey of Connecticut residents, 59% said it was somewhat or very difficult to maintain their standard of living because of rising state taxes and fuel and utility costs.

Sandwiched between the wealthy towns of Greenwich and New Canaan, Stamford has much more affordable homes. However, you won't sacrifice other quality of life factors like schools or nightlife.

While Alaska's secluded wilderness is a huge draw for many residents, it's also what makes the state so expensive. Alaska lacks the infrastructure to efficiently transport many goods throughout the state. While housing is fairly affordable, the costs of consumer goods and groceries are higher than famously expensive cities like London and San Francisco.

The cost of gas in Alaska is also consistently higher than the national average. Given how spread out towns are in the state, it quickly adds up for residents who have to travel for work or even for daily supplies.

Wyoming offers the same immersed-in-nature experience as Alaska, but for significantly less. The median home value is $226,200 and there is no state income tax.

Maryland's average cost of living is higher than expected because of metro areas near the District of Columbia. Commuter suburbs like Bethesda and Chevy Chase have home prices nearing a million dollars.

Maryland is also surprisingly expensive for renters. If you make minimum wage in Maryland, you'd have to work 109 hours a week to be able to afford a two-bedroom apartment.

After years of revitalization, Baltimore is a diverse and thriving city that is still within most people's budgets. Despite being in a seller's market in 2019, the median home value is still only $113,500.

Looking for a cheaper place to live? Clever can help!

Work with a top agent, find an affordable home, save thousands.

Since legalizing recreational marijuana and cannabis, home prices in Colorado have been steadily rising. The state is enjoying an influx of jobs and tourism, but with those benefits come cost-of-living increases.

With a similar open-minded culture and comparable natural beauty, Vermont is a great alternative for those who can't afford Colorado. The median home value is only $204,900, but it's best to buy now. Prices are predicted to increase by 3% over the next 12 months.

Oregon is coming off a major real estate boom and while home values have plateaued, other cost-of-living factors haven't self-corrected as quickly. For instance, rental prices in Portland have almost doubled since 2011 and show no sign of slowing down.

Oregon also has one of the highest state income tax rates at 9.9%.

If you wish you had predicted the Portland real estate boom, Eugene should pique your interest. This still-affordable town is showing similar signs of growth that Portland did a decade ago. Take advantage of the current reason prices and get in before prices blow up.

No matter where you want to buy a house, you need an experienced real estate agent by your side. Local agents will have the knowledge to find cost-savings opportunities along so you can stay in-budget, even in an expensive state.

Plus, when you work with a Clever Partner Agent in qualifying states, you may be eligible for Clever Cash Back. After closing on a home over $150,000, we send you a check for 0.5% of the purchase price. Contact Clever to get connected with a Partner Agent.

FAQs About the Most Expensive States to Live in 2019

What state has the highest property taxes?

When you look at property tax, there are two factors to consider. First, there's the base state property tax rate. Then the county and sometimes even additional city taxes are levied on top of that. This means tax rates are not equal across a state. But in general, four states have effective property tax rates over 2%. These include:

What states have the lowest taxes?

The total amount you'll pay your state in taxes depends on a variety of factors. First, whether there's a state income tax. Seven states do not currently impose state-level income taxes:

Day-to-day sales taxes will also contribute to how much you pay over the year. However, there are five states with no sales tax including:

What states have no property taxes?

Every state has a property tax that applies to real estate (23 states do not levy property tax on vehicles). However, there are some states with significantly lower property tax rates than the rest of the country.

What state is the cheapest to live in?

Based on home prices, the cost of living, and price parity, some of the cheapest states to live in the United States include:

All of these states have median home values under $150,000 and price parity scores under 90. Price parity provides an idea of how far a dollar goes in the state with 100 being the national average.

> Learn more about the Cheapest States to Buy a Home in.