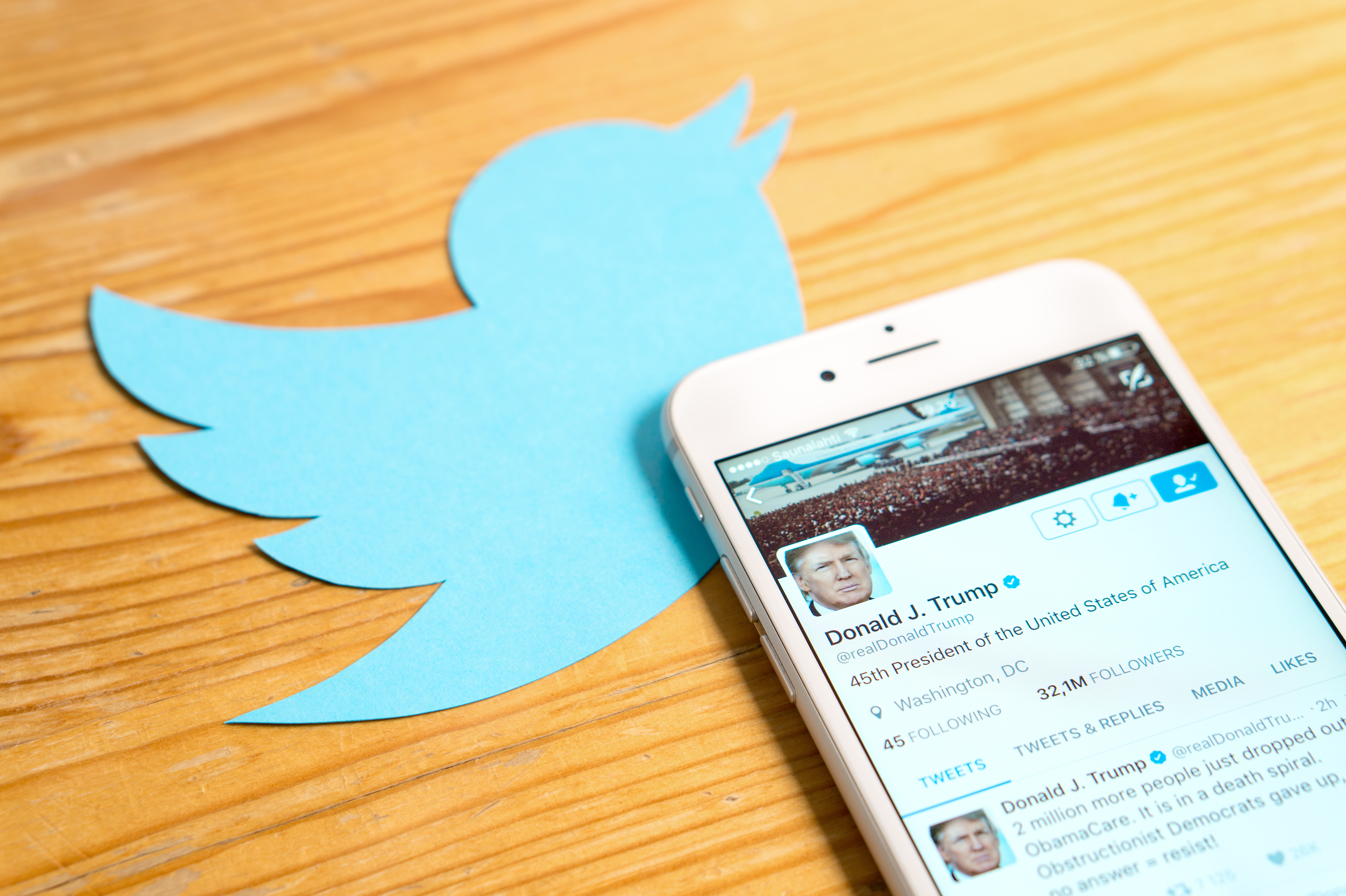 A decade before Donald Trump won the presidential election, Twitter launched. Twitter has changed a lot since its inception, and the platform has evolved into a mainstay of American culture.

President Trump uses his personal account, @realDonaldTrump, and he tweets significantly more often than his predecessor, Barack Obama. In less than one term, he’s tweeted over 13,000 times, averaging nine tweets a day.

The president also uses the platform to condemn and applaud different companies.

We’re in an unprecedented time where technology, politics, and the economy collide, and we wanted to answer a simple question:

How do President Trump’s tweets impact markets and individual stocks?

To answer this question, we assessed 3 years of the president’s Twitter posts and compared them to changes in U.S, Chinese, and company stocks.

We excluded retweets from our analyses to explicitly measure Trump’s thoughts via Twitter and only included days during which the market was open between November 1, 2016 and November 24, 2019. You can find our full methodology at the bottom of this article.

Here's what we found:

We analyzed the frequency of Trump’s tweets as measured by the number of tweets (not including retweets) per day and the S&P 500 closing prices each day in a linear regression to identify whether there was a relationship between the tweets and stock markets.

When Trump tweets more, the stock market typically does better. S&P 500 stock prices rise an average of 19.5 points for every additional daily tweet.

The frequency with which he tweets varies quite a bit: Trump posted a status on all but 8 open-market days since November 1, 2016. Most often (429 days) he tweeted fewer than 10 times in one day, and over 30 times on only 7 days.

Interestingly, the number of original tweets per day has increased since Trump took office. Lately, he’s been tweeting much more; in October of this year he tweeted an average of 19 times per day.

His most verbose day was on October 9th, when he tweeted 36 times (the most he’s tweeted in one day during the time period we assessed) and retweeted 11 times. The content of his tweets ranged from a new witch hunt to gas prices in California.

When we analyze the S&P 500 share prices during the 10 days before and after that day, we see an interesting trend that supports our broader regression findings: On average, the S&P 500 closed 7.35 points lower each day leading up to October 9th, then increased an average of 12.63 points each day for the following 10 days.

The relationship between the stock market and Trump’s tweeting frequency could be related to what he tweets about. On the 9th, for instance, he tweeted that America is better than ever before: 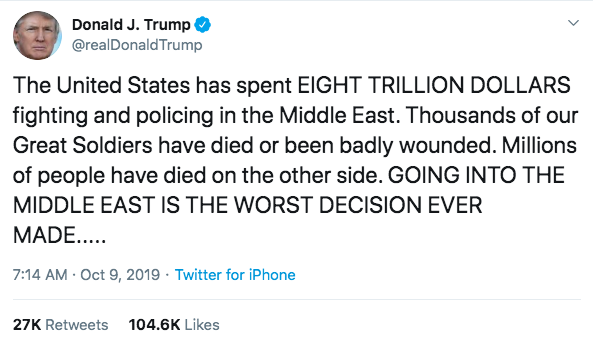 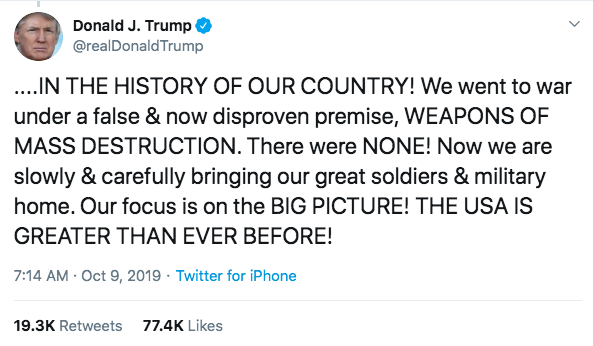 President Trump tells a positive and uplifting story that the economy is better than ever. According to Nobel laureate Robert Schiller, that narrative might be a good thing when it comes to avoiding another recession:

Framing the economy as strong could induce behaviors that help stave off economic decline, like spending and investing more — something people would do less if they believed we were headed toward another crisis.

This "self-fulfilling prophecy" could be part of the reason Trump's tweets impact the S&P 500 and the market at large.

The frequency of Trump’s tweets was also related to lower 10-year Treasury yields. Treasury yields are representative of the return on investment on a bond or note purchased from the Treasury.

The 10-year Treasury yields are related to fixed-rate 15-year and 30-year mortgages such that lower yields typically mean lower interest rates. It’s likely that changes in the 10-year Treasury yields are also related to changes in fixed-rate mortgages, too. Therefore, the effect of these market changes can eventually impact consumers even if they’re not purchasing bonds.

Trump’s tweeting frequency is related to the stock market, but what about the content of his tweets? He notoriously tweets about the U.S. economy; often calling out the Federal Reserve for high interest rates, comparing our economy to the European Union and China, or making commentary on politicians and political parties. 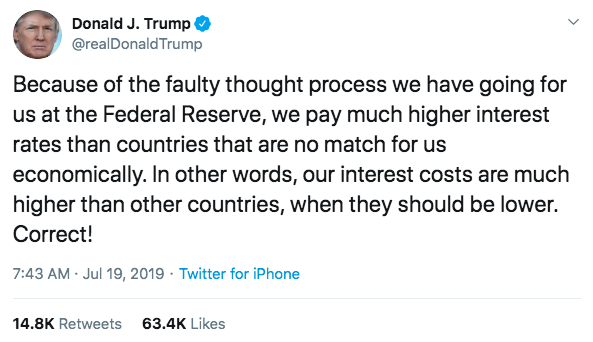 Trump’s 280-character messages are indeed related to the robustness of the stock market (S&P 500) and 10-year Treasury yields: When Trump tweets about the Federal Reserve, S&P 500 stock shares tend to close 43 points higher. 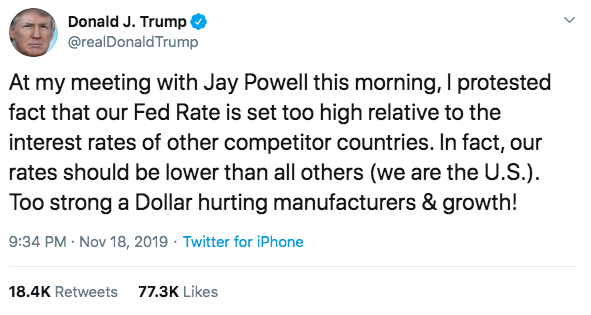 An analysis by the National Bureau of Economic Research (NBER) found a direct relationship between the Federal funds rate and Trump’s tweets.

In other words, when Trump calls out the Fed, fixed mortgage rates decrease because they’re tied to the Treasury yields and adjustable mortgage rates, which are more-closely related to the federal funds rates, drop.

While that might seem like a positive outcome for borrowers, the increased volatility in the market and fuzzy boundaries across government entities as a result of a verbose president could harm the economy.

The NBER noted in their report that the “enhanced autonomy for instrument setting allowed the Fed to aggressively target and stabilize inflation in the ensuing three decades” after the Great Inflation of the 1970s. Therefore, the president’s public criticism and Fed’s lack of independence could not only negatively impact the credibility, but could also catalyze a recession.

Moreover, if the Fed seems to adjust rates based on the President’s tweets, people might learn to expect adjustments when he tweets about raising or lowering fund rates. As a result, we could see investor, consumer, and business level changes that affect the market overall.

Trump also uses Twitter as a political tool against China. We’ve already seen that tweets are related to the U.S. market, so we assessed whether his tweets impacted foreign markets, by analyzing differences in the HSBC index on days when Trump tweets about China compared to those he does not.

We specifically chose the HSBC manufacturing index because it is considered to be an indicator of the overall health of the Chinese market and is related to manufacturing. Trump has tweeted numerous times about placing tariffs on Chinese goods into America, so we wanted to assess the impact on a market impacted by trade.

The HSBC closed 3.4% lower on the 131 days Trump tweeted about China compared to the days he didn’t mention China at all.

The reason for that drop in the HSBC index is likely due to Trump’s threats to increase tariffs on Chinese goods coming into America, which suggests people are making market predictions based on his tweets about monetary policy.

On August 4, 2018, for example, Trump tweeted about tariffs’ impact on China’s market: 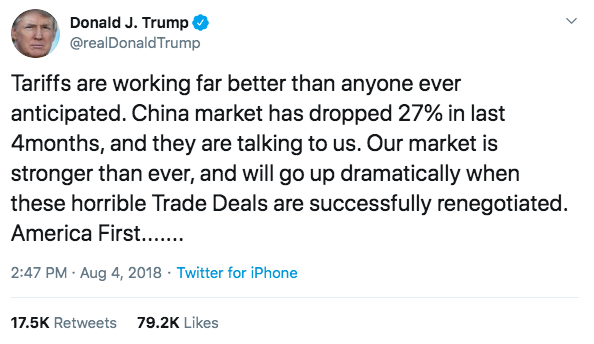 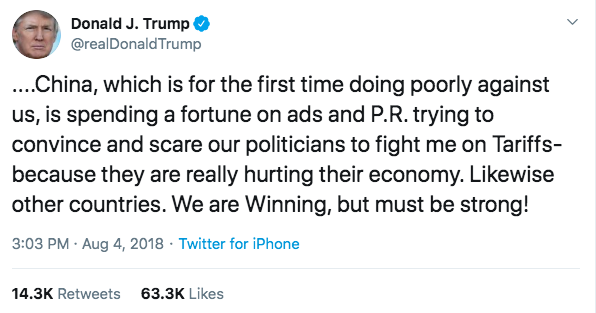 The HSBC stock closed 1.6% lower the next day (the day was a Sunday, when the stock market is closed) than it had on Friday.

According to sentiment analysis we conducted on the language in Trump’s tweets, he’s generally positive. But his language tends to be more negative when he’s tweeting about certain companies, like Amazon or the New York Times. 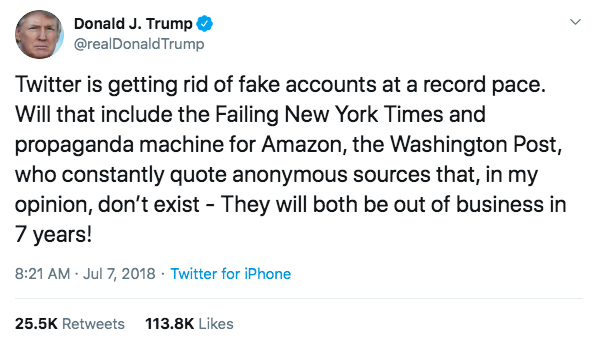 But how do those tweets actually impact businesses?

To answer this question, we looked at a handful of privately held companies that have been the target of Trump’s tweets. Overall, we found that Trump’s tweets do tend to impact short-term stock prices for most companies but not necessarily predictably.

Trump often proclaims that the New York Times is failing.

Ironically enough, their stagnant (if not actually failing) stocks hit a low point (nearly $10 per share) on the days leading up to the 2016 election but took a sharp turn shortly thereafter and have outpaced market growth since then. 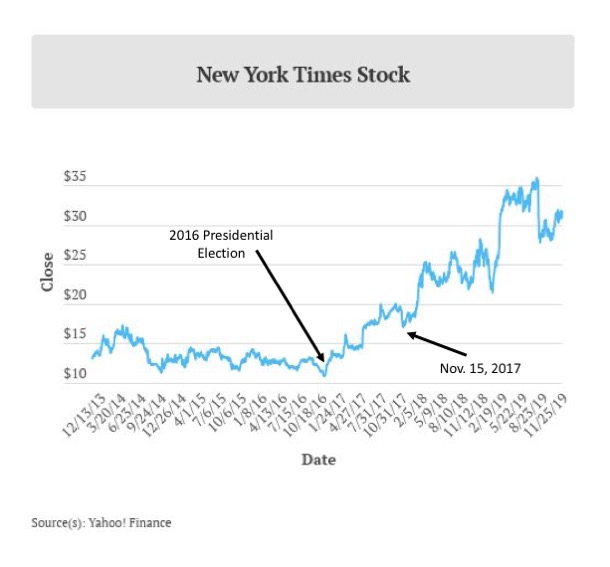 Let’s take a look at the end of 2017, when the New York Times’ stock began to drop again.

Trump tweeted three times in a row on November 15 about the New York Times.

Nordstrom dropped Ivanka Trump’s clothing line in 2017. Trump wasn’t pleased with that decision, which he voiced on February 8, 2017.

In the days leading up to the 8th, Nordstrom’s daily stock changes were at best less than 1% (and often negative), but Trump’s tweet shook things up. Reports suggest that their stock dropped about 1% immediately following the comment, but they recouped those losses and closed 4% higher by the end of the day than the day before.

During his campaign, Trump established an initiative for creating new jobs by incentivizing companies to manufacture in the U.S. instead of overseas or in Mexico. Many vehicles, including those made by American-owned companies, are manufactured in other countries.

Their stock had been on the downturn since before Christmas, but closed 0.9% higher on the 3rd and jumped another 5.5% on the 4th.

Trump had a similar issue with Toyota’s plans to open a factory in Mexico. 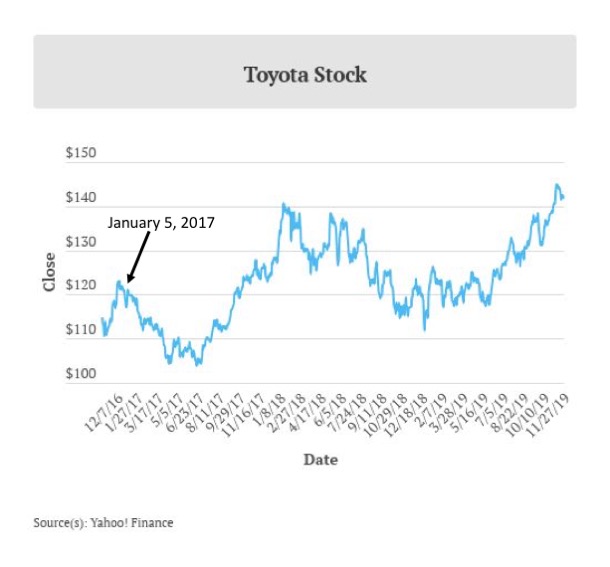 Toyota did eventually announce plans to build a plant in the U.S. to build the Corolla (while keeping the Mexico plant) and Trump responded saying, it was a “great investment.” Their stock closed 0.8% higher than the previous day.

At least for now, it seems that Trump is incorrect in his assessment about the New York Times and others. But there is evidence of a relationship between his tweets and stock prices, even if the effects are short-lived.

The relationship is counterintuitive in some cases, as the stock prices seem to rise even when the tweets are negative, which perhaps highlights the adage that any publicity is good publicity.

We gathered tweets from the Trump Tweet Archive, which houses all tweets and retweets from the @realDonaldTrump Twitter account. We only assessed original tweets by excluding retweets.

We calculated tweet frequency as the number of tweets each day between November 1, 2016 and November 24, 2019.

Tweets were analyzed for content and sentiment. To assess the content of the tweets, we cleaned the text so that it did not include punctuation or stop words (e.g., “and”, “would”), and all the letters were transformed to lower-case to search more easily.

We aggregated the frequency (overall and for individual terms) of tweets on a daily basis.

For the sentiment analysis, we used Python’s TextBlob library, which provided a value for each text based on the terms present in the text. The sentiment values range from -1 (negative) to +1 (positive).

All stock values and Treasury yields were based on daily close values.

The stock market is only open on business days (i.e., holidays and weekends are excluded), so we focused mainly on Trump’s tweets on the days the stock market was open in order to see short-term effects of his tweets.

For individual terms, we ran similar analyses while controlling for overall tweet frequency. This allowed us to examine the relationship between how many times Trump mentioned a particular term on a specific day (e.g., the Fed) and the closing values on that day while keeping the total number of tweets constant.