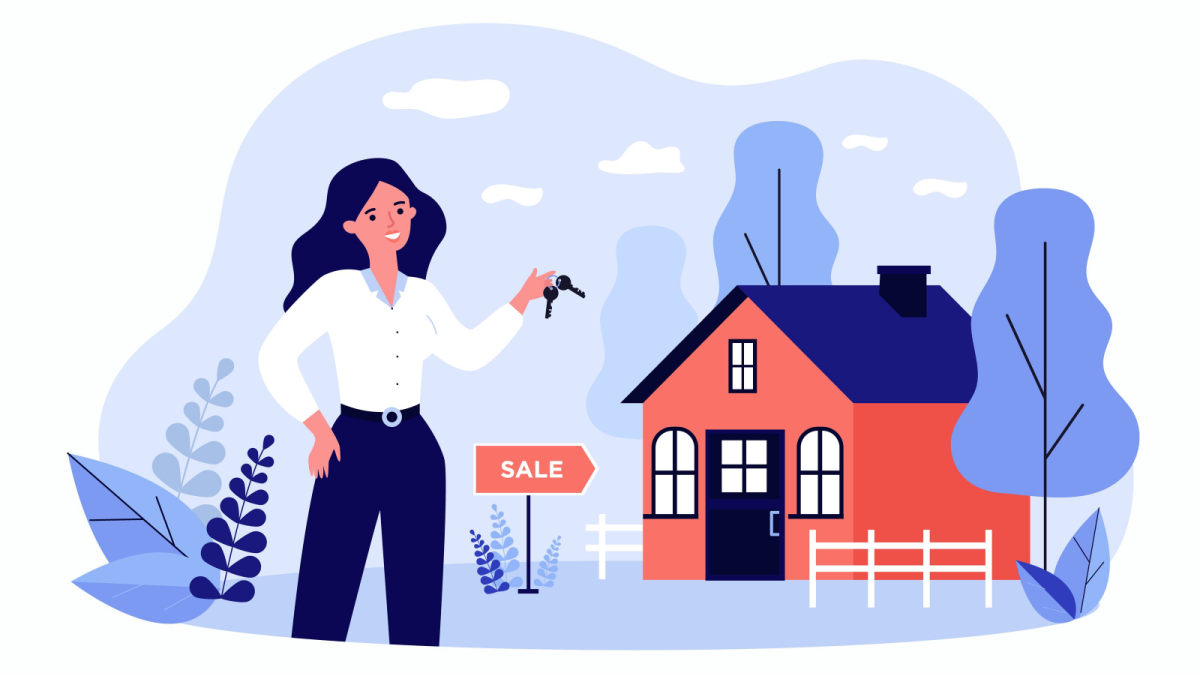 Selling a home has been an easy and hassle-free endeavor for most Americans over the past two years. Amid low inventory, demand for housing reached new highs, creating an extreme seller's market that Americans leveraged to cash in on big profits.

But the decision to sell wasn't all about the money. As buyer concessions, waived inspections, and record home-sale times became the norm, nearly 1 in 3 Americans (30%) listed their home because it was a good time to sell.

Not only could Americans sell for a hefty profit, they could also do so quickly and without much effort.

More than three-fourths of sellers (78%) were happy with the timing of their sale — especially because two-thirds (64%) think the real estate market is now worse for sellers than when they sold. Nearly one-third of respondents (31%) believe it's no longer a good time to sell and an even worse time to buy (36%).

Selling a home isn't as effortless as it was a year ago. In March 2022, the Federal Reserve raised interest rates for the first time since 2018 to tackle rampant inflation. After months of incremental hikes, the rate reached nearly 7% in October, pricing out many buyers and chilling a red-hot market.

About 40% of respondents expected more competition among buyers than they actually experienced, with 2022 sellers 16% more likely than 2021 sellers to be disappointed in the level of competition.

To learn more about the reality of selling in a rapidly changing market, we surveyed 1,000 Americans who sold a home in 2021 and 2022. We found that 93% of sellers said market changes impacted their selling experience, particularly the timing of their sale.

Read on to learn how Americans sold their homes in 2021 and 2022 and the ways they changed tactics amid worsening market conditions.

90% of Home Sellers Compromised on Their Priorities

Despite a hot market, 90% of recent home sellers had to compromise on their priorities.

However, fewer than half of sellers who compromised (45%) sold their home in 2021, when borrowing was more affordable and buyer demand was higher. In fact, 2021 home sellers were 2.5x more likely than 2022 sellers to say they did not have to make any compromises when selling.

Although selling quickly was their chief concern, sellers compromised on this priority the most. Of those who prioritized selling quickly, 1 in 6 (17%) said their sale took longer than expected.

2022 sellers, in particular, were 41% more likely to experience a longer home sale as shrinking demand gave buyers more time to tour homes and think about their decision.

In addition to sacrificing their preferred timeline, more than 1 in 3 sellers (36%) had to concede to additional buyer demands, such as repairs. Of the 37% of sellers who did not want to make repairs, 14% had to compromise on that priority.

90% of Recent Home Sellers Have Regrets

Compromising on their priorities inevitably led to regret among 90% of sellers.

One-fourth of Americans (25%) said they should have made repairs before listing their home, making it the most common regret among sellers.

Making repairs is important because homes in good condition increase in value and attract more buyers. On the other hand, allowing a home to fall into disrepair could lead to negative equity and cut into sellers' profits.

That's no small consideration when 1 in 5 sellers (20%) regretted that their home didn't sell for enough money.

Sellers also regretted listing their home before finding a new place to live. Three-fourths of sellers (73%) bought a new home after they sold, but a quarter (25%) said it was a struggle.

The U.S. is short about 3.8 million homes, making it more difficult for buyers to procure a place to live. About 80% of buyers had to make more than one offer on a home, with 41% submitting five or more, according to an Anytime Estimate survey.

Luckily, Americans who previously purchased a home had a competitive advantage. With profit from their home sale, they could use those funds to pay for a new home in cash, increase their down payment, or win a bidding war. As a result, they were 47% more likely than first-time buyers to submit only one offer.

Finding a new place to live was tough for multiple reasons. Beyond competitive market conditions, sellers often had an emotional connection to their home. One-fourth of respondents (25%) regretted selling because they miss their old home, especially if they were forced to move because of a job change or financial situation.

1 in 5 Sellers Regret Not Using a Real Estate Agent

To avoid mistakes that could lead to regret, a majority of sellers turned to a real estate agent. Two-thirds of sellers (67%) hired an agent, 20% sold their home by owner, and 12% sold to an iBuyer.

More than half of sellers (52%) were satisfied with their agent, but 1 in 5 (20%) regretted how much they paid in commission.

For many sellers, however, a Realtor's expertise and assistance was worth the price. Among those with regrets, about 21% said they should have sold with a real estate agent — slightly higher than the 20% who wish they sold by owner.

As real estate values grow over time, the number of years Americans spend in their home before selling can significantly impact their profit. Real estate experts recommend living in a home at least five years so the value can rise enough to cover the costs of buying.

More than one-third of respondents (36%) followed that advice and lived in their home five to 10 years before selling. Another third (34%), however, stayed in their house less than five years.

That percentage includes 1 in 10 sellers (10%) who lived in their home for less than one year, even though short-term capital gains are taxed at higher rates than assets held for at least two years.

Selling before the five-year mark might have made financial sense in 2021, when sellers could recoup their costs faster because of rapidly rising home values. Nationally, home values tend to appreciate 3% per year. But from August 2021 to August 2022, they rose nearly 14%.

Home prices are finally starting to fall, but survey respondents still sold their homes for a median price of $560,000 — 27% higher than the national median of nearly $455,000.

More than half of sellers (55%) were happy with the profit they made on their sale — likely because 80% sold their homes for at least asking price.

About 1 in 3 sellers (35%) accepted an offer above asking price — roughly equivalent to the third of recent home buyers (31%) who paid more than the list price, according to the Anytime Estimate survey.

It's perhaps no surprise, then, that 2021 sellers were 26% more likely than 2022 sellers to be satisfied with the profit they made on their sale.

In the past, real estate agents have suggested offering 1%–3% above asking price, but buyers desperate to own homes offered a median 13% more. Among sellers who secured more than their asking price:

For homes that sold above asking price, the median amount paid over the listing price was $60,000 for a median sale price of $530,000.

Only 1 in 5 Sellers Sold Below Asking Price

The average home sold above listing price for 17 straight months but fell under asking price for the first time in August 2022 as the market weakened.

Although two-thirds of sellers (63%) had to reduce their price, setting the initial amount higher may have resulted in a more profitable sale, even if sellers were negotiated down.

94% of Sellers Received More Than One Offer

Still, almost 1 in 5 sellers (19%) said they didn't receive as many offers as expected. Surprisingly, half of those buyers sold their home in 2021, indicating that even in a hot market, many had unrealistic expectations.

More Than Half of Sellers Accepted an Offer Within 1 Month

It didn't take sellers long to find an acceptable offer, and more than half (54%) were satisfied with how quickly their home sold.

Respondents' answers correspond with national data showing the median time on market was approximately 36 days in June 2021 — the fastest rate in which homes sold that year.

Buyers were motivated to purchase while interest rates remained low. When they started to rise, time on market plummeted to 31 days between the peak selling months of April and June 2022 as anxious buyers rushed to beat additional increases.

By September 2022, the median time on market jumped to 50 days — seven days longer than the same month a year before.

If anyone knows how to sell a home quickly, it's an experienced real estate agent. Sellers who hired an agent were 13% more likely to sell their home in less than a month than those who sold by owner.

iBuyers can also help Americans sell fast, but only 28% of sellers are familiar with those companies. As a result, sellers may use iBuyers only as a last resort if they've tried and failed to sell on the open market.

Sellers who sold to an iBuyer were 3x more likely than those who used an agent to say their home sat on the market for six months or more.

Although the market isn't as competitive now as it was in 2021, it still favors sellers, and 41% of respondents said selling their home was easier than they anticipated.

A seller's market has many advantages for Americans listing their homes. About 1 in 4 sellers reported that buyers made concessions (26%), waived an inspection (26%), and did not ask for repairs (24%).

But the greatest advantage, according to respondents, was that homes sold quickly. Among those who found home selling easier than expected, a majority said it was because they sold quickly (52%) and for a good price (51%).

Another third (33%) said the sale didn't require much effort or prep work.

But as fewer Americans look to buy as interest rates rise, the market pendulum has shifted somewhat back toward buyers. Consequently, 2022 sellers were 43% less likely than 2021 sellers to say home selling was easier than expected.

Sellers who had to concede to buyers' demands found home selling more difficult. The most common difficulties included making repairs (42%), making concessions (39%), and lowering the asking price (37%) — with 2022 sellers 21% more likely to reduce their price than 2021 sellers.

The proprietary data featured in this study comes from an online survey commissioned by Clever Real Estate. One thousand people who sold a home in 2021 or 2022 were surveyed Sept. 29 – Oct. 2, 2022. Each respondent answered up to 21 questions related to their home-selling experience.

Since 2017, Clever Real Estate has been on a mission to make selling or buying a home easier and more affordable for everyone. 12 million annual readers rely on Clever's library of educational content and data-driven research to make smarter real estate decisions—and to date, Clever has helped consumers save more than $70 million on realtor fees. Clever's research has been featured in The New York Times, Business Insider, Inman, Housing Wire, and many more.

Today's market still favors sellers. However, the market pendulum is swinging back toward buyers, with more than one-third of sellers (36%) making concessions. Learn more.

Real estate experts recommend living in a home at least five years before selling. More than one-third of sellers (36%) lived in their home for five to 10 years, while 1 in 4 (24%) reported a residency of less than five years. Learn more.