Should you buy a home with EIFS? | EIFS vs. traditional stucco | Pros | Cons | Repair costs | FAQs

EIFS is a synthetic type of stucco with built-in insulation. It was developed in the 1970s as a more affordable way to control a building's temperature.

When improperly installed, EIFS can be expensive to repair and can even threaten your health. Due to widespread bad installations during the '70s and '80s, EIFS has a less-than-stellar reputation in the U.S.

Should you buy a home with EIFS?

Whether or not you should buy a home with EIFS depends on a few factors:

If the home you want was built after 1999 and passes inspection, it's an easy YES! After 1999, EIFS installation standards greatly improved, so there's not much to worry about with these newer builds.

If the home you're buying is older than 1999, you should hire an EIFS-certified inspector. They will be the most qualified to let you know if the home is in good condition. You can also request a warranty from the owner for more peace of mind.

If the inspection does find damage related to EIFS, you have some options:

» LEARN: How much does a specialized home inspection cost?

EIFS is better suited to more arid climates and desert regions. If you live in a rainy area, EIFS probably isn't the best choice for you as it can be prone to water damage.

How do I find out the quality of a home with EIFS?

Hiring an inspector with EIFS certification is a must for older homes.

If a home with EIFS was built between 1970 and 1999, that can be a red flag. EIFS was still new to the U.S. then, and bad installations were common.

EIFS installed after 1999 adhered to higher standards and is generally considered safe.

What's the difference between EIFS and traditional stucco?

These days, EIFS and stucco are equally common and hard to tell apart just by looking at a home's exterior.

An exterior insulation finishing system (EIFS) is a type of exterior siding made of insulation and synthetic materials. It's also sometimes called "synthetic stucco."

Unlike traditional stucco, EIFS has several layers. Notably, it binds a layer of insulation to the siding itself, protecting the insulation — as well as the framing, plumbing, electrical, and foundation — from water damage. 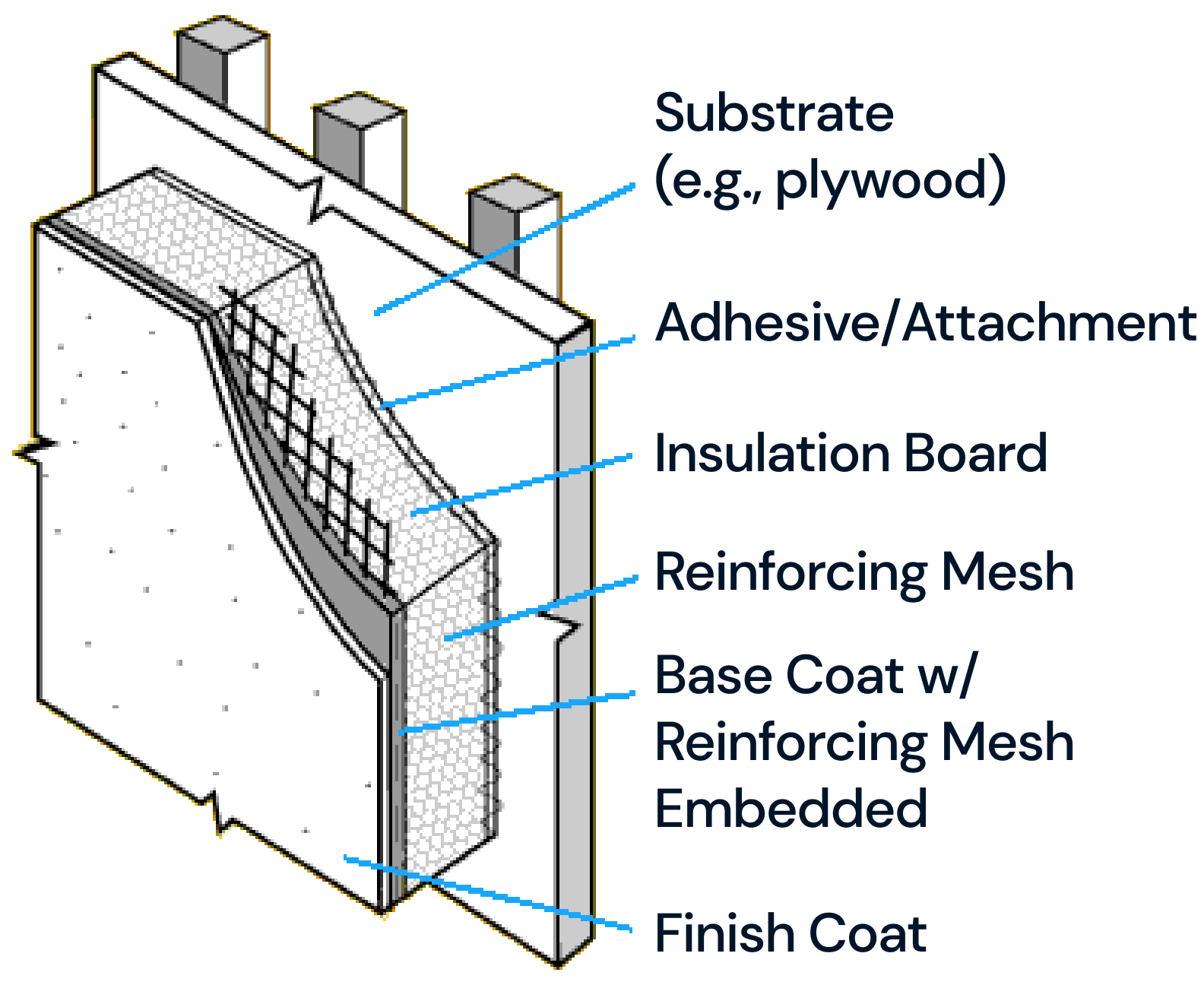 What is traditional stucco?

Traditional stucco is a type of exterior siding made out of cement, lime, sand, and water. Given that it uses natural materials, it's cheaper to install than EIFS.

The biggest advantage of EIFS is its high energy efficiency, especially in warmer climates.

EIFS stucco is also more materially efficient, thanks to its 3-in-1 advantage: insulation, exterior, and design of the exterior.

Another advantage to EIFS is its durability. You can expect:

Because its top layer is malleable and versatile, EIFS is easier to patch and repaint — or replace altogether — should you need any repairs down the line. And since it's so cost-effective, EIFS is becoming more common, especially in warmer climates, so reputable contractors are easier to find.

Poorly installed EIFS typically leads to water damage, which can cause a host of problems for homeowners:

The major problem areas for damage are anywhere where water can pool:

Including a drainage system within the EIFS can prevent moisture accumulation on the off chance water does get inside the siding.

Poor installation is the biggest risk with EIFS, though that's not an issue with the material itself. Before buying a house with EIFS, get it inspected by a certified professional to find any potential damage.

EIFS typically costs $30–50 per square foot to replace — more expensive than $8–20 for stucco.

But it's relatively easy to repair since it can be removed and replaced in sections.

Plus, you'd usually only need to repair damaged sections, rather than the entire home's exterior.

Water damage repairs are the most expensive, as they may call for a complete replacement of the EIFS — and that can cost around $3,000.

Exterior insulating finishing system (EIFS) stucco is a type of exterior siding with built-in insulation made up of synthetic materials like plastic and mineral wool.

Despite a polarizing reputation, EIFS is a commonly used type of exterior siding for both residential and commercial buildings today. While you're not able to tell if a home has EIFS from the outside, certified inspectors will be able to let you know.

When it hasn't been properly installed, EIFS could deal with water damage, which can then lead to other problems such as structural issues, mold, and pest infestation.

Unless the EIFS exterior on your home is damaged, there's no reason to remove it. Removing EIFS can cost around $3,000, depending on the size of your home.

EIFS can be removed piece by piece with readily available tools once the topcoat is removed.