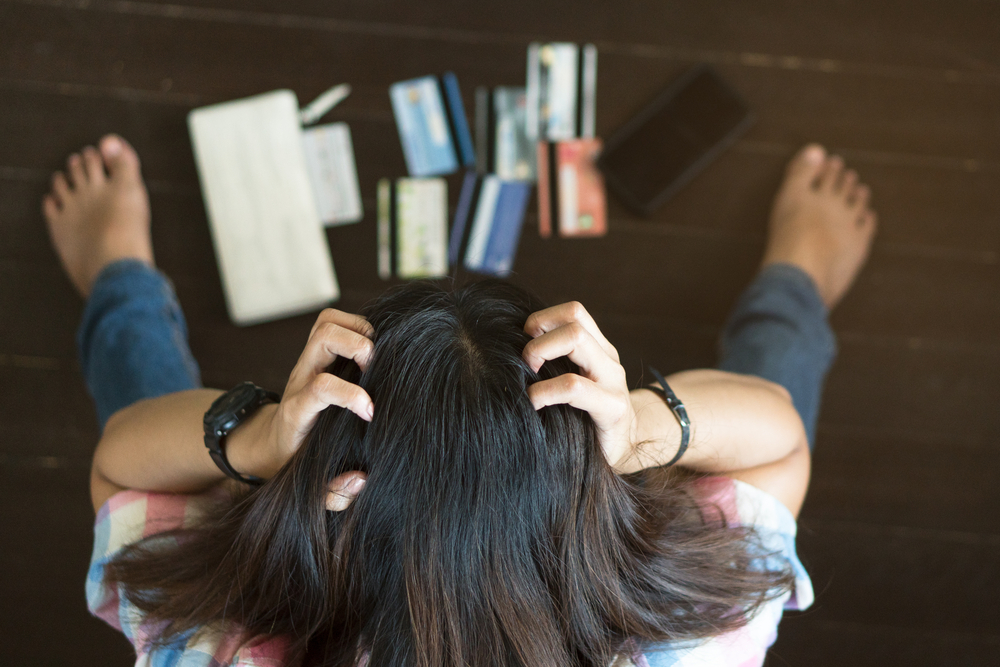 Four trillion dollars. No, that’s not the national deficit; it’s the amount of personal debt Americans carried as of last month, and that’s not even including the $9.4 trillion in mortgage debt. Our debt has been on the rise since the end of World War II and doesn’t show any signs of stopping: In just the last 5 years, consumer debt has grown 25% and has doubled since the turn of the century.

Over the next decade, debt doubled and the average American household was $4,000 in debt (7.3% of median household income). Meanwhile, unemployment and inflation were climbing. A 1994 Washington Post article declared that “the eagerness of the middle-class to take on debt in the 1950s was the first crack in the relentless financial logic of the Depression” and it seems that crack was the catalyst to an avalanche.

Despite multiple economic crises — including the longest and most severe recession since the Great Depression — and stagnant wages, Americans never seemed to pump the brakes and surpassed $4 trillion in debt last month.

The average American household now holds $31,428 in debt, which calculates to 40% of the median household income.

So how did we get to the point where American households hold more debt than the entire United Kingdom government? To answer this question, we assessed consumer debt since the 1950s using data from the Federal Reserve. We identified three major culprits that have played a pivotal role in our spending habits: credit cards, financial literacy, and location.

Lending has a long, rich history within American culture, but borrowing wasn’t always as easy as hovering your watch above a card reader. In the mid-20th century, people could take out small loans from banks for items like refrigerators or use charge cards, which were to be paid in full at the end of the month.

But with the wake of the Great Depression waning, dramatic changes were on the horizon. A larger middle class and increased wages were compounded by groundbreaking changes in accessibility to credit and by 1958, revolving credit was born. Borrowers no longer had to settle their bills each month, but could carry their balance forward for a fee.

The advent of revolving credit spurred the rapid growth of the modern credit card: In 1966, the Bank of America released the first general-purpose credit card that could be used at over 60,000 companies nationwide and in 1968, MasterCard went global. The average American household held only $78 (adjusted for 2018 inflation) in revolving debt two years after its debut, but no longer were the days of lusting over unaffordable commodities. Americans could carry a loan in their pocket to use as they pleased.

Credit cards didn’t just open the door to simpler borrowing, they also allowed — if not encouraged — over-spending. According to the FINRA Investor Education Foundation, 19% of Americans spent more than their income in the past year and 36% broke even in 2018, leaving many with bills larger than their paychecks at the end of the month. The 7 in 10 borrowers who didn’t pay the full balance on their accounts each month paid $113 billion in credit card interest and fees last year. That’s up nearly 50% since 2013 while overall revolving debt increased 20% during that time, suggesting that we’re not only spending more in general, but more of that debt is going unpaid month-to-month, compounding initial debt.

Not coincidentally, bankruptcies began to increase around the 1960s and skyrocketed between the 1980s and 2006, with 4x more families filing for bankruptcy. And, while that rate slowed after its peak during the Great Recession, bankruptcy is still extremely commonplace compared to the recent past.

Americans have been living beyond their means for far too long. The availability of credit certainly played a pivotal role in people’s purchasing habits, but after decades of missteps and dire debt, the trend continues and begs the question: Why?

The complete answer to that question requires a thorough analysis of the human psyche and the economy, but we hypothesized that people’s understanding of finances might play a role. We needed to know more about consumer financial literacy in American, so we launched our 2019 Financial Literacy Survey. We asked 1000 Americans a series of questions related to credit cards, loans, and credit scores.

Here’s what we found:

People answered 67% of the questions correctly, with the highest scores on questions about credit scores (74%), followed by credit cards (66%), and more general loans (61%). If our survey was a college exam, our students would have earned a solid “D”.

Taking a deeper dive into the data, we found that baby boomers performed the best, but they were a far cry from star-student status with an average score of 76%; and millennials trailed sluggishly behind at a 56% correct.

Baby boomers scored better than millennials on all credit card related questions, but the most substantial differences were on questions about credit card interest rates.

Millennials’ subpar understanding of finances more than likely contributes to their debt. The Council for Economic Education found that 75% of college students who had a credit card didn’t realize fees were applied to late payments.

When shopping for a card, over half of people don’t consider alternatives. But even when they do, millennials miss the mark. A study by The Ascent found that millennials are less likely to consider the annual percentage rate (APR) when choosing a credit card than their baby boomer counterparts.

What’s worse, The Ascent reported that millennials aren’t even sure what “APR” means and, in line with those findings, only 4 in 10 of the millennials in our study were able to choose the correct answer to the question “What is interest?” Baby boomers, on the other hand, were twice as likely to answer this question correctly.

The average APR during the first quarter of 2019 was 15.09%, but those rates are extremely variable, with some nearing 28%. The seemingly innocuous action of choosing a card without considering the APR puts millennials at a higher risk of the snowball effects of revolving debt.

By comparison, people better understood credit scores across the board and the differences between generations was much smaller for most of these questions. Millennials were 3x more likely than boomers to believe that credit scores might drop if you check it yourself.

How You Spend Your Money Depends on Location

The price of living in a particular area of the country is highly dependent on cost of living, which bleeds into the cost of goods and mortgages. Unfortunately, the wage differential isn’t always large enough to cover the variation in cost of living across the country.

An analysis by Advisor Perspectives revealed that about half of the states' purchasing power is less than that of the median household income, meaning their dollar doesn’t go as far.

The overall amount of debt and distribution of debt varied across states; but also did debt as a proportion of people’s income. We calculated a debt-to-income percentage for each state by dividing the total auto loan, credit card, and student loan debt by the median household income. In order to be consistent with data from the Federal Reserve, which excludes real-estate related debt, we didn’t include types of debt that amortize over time (e.g., mortgages).

The average debt ranged from 14% of median household incomes in Hawaii to 31% Mississippi.

Since 2003, debt increased by 90% while median wages lagged behind at 7% growth. Mississippi had the most growth in their debt-to-income percentage, meaning their debt accounts for more of their income today than it did 15 years ago. That growth landed Mississippi with the highest debt to ratio percentage (31%) in 2018. Washington, on the other hand, had the least debt-to-income growth; so their debt accounts for only 4% more of their income than it did in 2003.

We broke down auto and credit card loans by state to better depict the differences across the country. In line with our ranking, Texas residents have by far the highest auto loan debts at $6,720 (compared to the national average of $4,659). The credit card debt in the state ($3,270) was about average ($3,101).

Credit card debt was highest in Alaska, Hawaii, and New Jersey (>$4,000). Alaskan and Hawaiian residents pay more for most goods because of their location, so it’s no surprise that they’re racking up more debt. Those in New Jersey also had higher mortgages ($40,630) and student loans ($6,090) than average. Kentucky, Mississippi, and West Virginia had the lowest credit card debt (<$2,500).

The upward slope in debt accumulation across the United States could be a sign of trouble to come when you consider the additional debt from home values. Studies that we published earlier this year confirm that home values are outpacing wages and that younger generations are putting off large purchases, like homes, because they’re underwater with student loans. That delay might be smart considering millennials earn less than previous generations at the same age, but increasing debt-to-income ratios across the board aren’t going to do them any favors when they do choose to apply for a mortgage.

In short, Americans are taking on more and more debt and living well beyond their means. The easy access to credit cards and their potential to cause financial problems is exacerbated by our general misunderstanding of finances. It’s no surprise that people aren’t financially literate: according to the Council on Economic Education, fewer than half of states require that public secondary education institutions even offer financial literacy courses, and less require the course for graduation. More education at a younger age might improve financial decisions later in life.

We analyzed multiple data sets from the Federal Reserve and Census for this study.

We divided the total national, annual debts (total, revolving, and non-revolving) by the number of households in the U.S. each year to estimate the average household debt. U.S. debt data were from the Federal Reserve and household estimates were from the Census Bureau.

Median household incomes were historical data from the Census, 1984 to 2018. We used median income to calculate debt to income percentages nationwide and by state. For nationwide debt-to-income, we used the Federal Reserve’s estimates on national debt each year, divided by the household income. The same calculation was used for the state-specific debt-to-income percentages, but we measured state debt as a summation of average student loan, auto loan, and credit card debt for each state (data from the Federal Reserve Bank of New York) and divided those values by the Census estimates of median household incomes for that state.