Tudor architecture is a favorite among American home buyers due to its distinct storybook feel combined with medieval charm. These homes are characterized by their steeply pitched gable roofs, elaborate chimneys, decorative half-timbering, brick exterior, and diamond-shaped or rectangular windows. 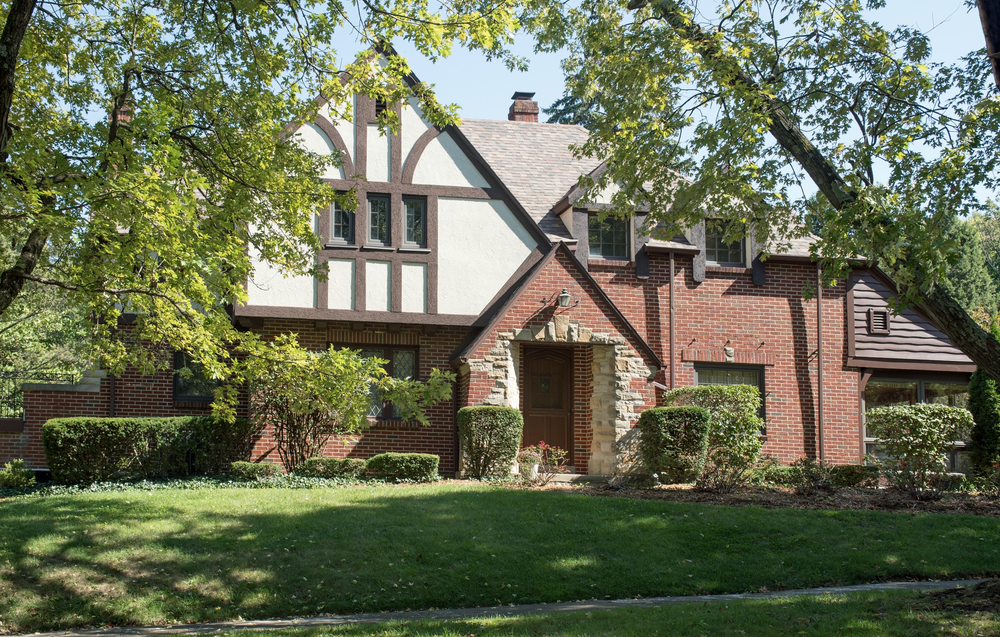 Tudor-style homes first appeared in England during the 15th century. They made their debut in the United States in the 1920s after being dormant for more than three centuries.

Tudor Revivals took aspects from the original English Tudors but added a modern flare. They are now the most common type of Tudor home and are mainly found in the Northeast and Midwest.

Original English Tudors derive from British medieval architecture created during the 15th and 16th centuries under the Tudor dynasty. The majority of English Tudors were two to three stories tall and made primarily of timber.

Builders would insert woven poles comprised of branches, twigs, or reeds between the timbers, known as wattle. They would then use a mixture of clay, sand, and dung to seal the walls to become as hard as concrete. [1]

Once the materials were dry, builders often painted the home with lime wash. Half-timbering allowed the wood to be seen from both the inside and outside of the house.

Besides their half-timbering, English Tudors were known for their tall windows, steep thatched roofs, and stone chimneys. This style was known for having multiple fireplaces inside the home, which was considered an architectural feat at the time.

Tudor Revivals made their first appearance in the United States during the early 1900s. Americans embraced the style and built new homes with a blend of old-world and modern design elements. Tudor Revivals are also known as “Mock Tudors” or “Jacobeans.”

Like their medieval counterparts, Tudor Revivals are two stories tall with a half-timbered facade used purely for decoration. The first floor is typically made of brick or stone walls. Revivals also feature steep slate rooflines, gabled windows, and a brick or stone chimney.

Tudor Revivals' popularity declined before World War II because they were costly to build. When soldiers returned home from war, builders needed to mass-produce houses for the baby boom that would come, like Colonial Revivals and ranchers.

Sell or Buy a Home with Clever and Save Thousands!

Enter your zip code to see if Clever has a partner agent in your area!

Tudor architecture features a signature look passed down through the centuries. Both the exterior and interior of English Tudors and Tudor Revivals have common features and characteristics.

>>MORE: Chimney Inspection Costs: How Much Does It Cost to Clean and Inspect Your Chimney?

English Tudors gave inspiration for two other home types — Tudor Revivals and Tudor cottages. They all share similar features, but the newer styles are updated and modern.

English Tudors originated during the 1500s and were initially built for the wealthy. They were adapted for everyday citizens after several decades.

Their half-timbered look became the standard for all Tudor-style houses.

Architects began building Tudor Revivals at the beginning of the 1900s. Americans wanted opulent and grand homes, and Tudor Revivals offered just that.

Tudor Revivals feature stone or brick walls on the first floor and a half-timbered look on the second. The roof is typically made of slate and is very steep with multiple gables.

The exterior of Tudor Revivals often features a hanging or jetty over the front door, which is typically medieval in design. The interior is just as lavish as the outside, with half ceiling beams and stained glass windows.

Tudor Revivals have an asymmetrical layout, making these homes more open and mysterious. It’s possible to find a dumbwaiter or a set of servant’s stairs.

Tudor Revivals were extremely expensive to build. The building materials were costly as architects tried to emulate a particular look that had long passed by. Tudor cottages became the answer.

This home style is much smaller than its counterpart with one- to one-and-a-half stories of living. They still have many other elements of Tudor Revivals, such as steep roofs and faux half-timbered facades.

Who should buy a Tudor-style home?

Tudor-style homes are not great options for first-time homebuyers since they tend to be pricey. They are, however, great for those looking to expand their family since they boast a lot of space.

Tudor homes are great for anyone enamored by their classic, medieval, and Shakespearean charm.

>>MORE: Going Off-Market: How to Buy a House That Isn't for Sale

Pros of buying a Tudor-style home

Tudor homes may be expensive, but they offer a timeless style. Their storybook look is often reminiscent of English country houses and manors.

There are also not many Tudor houses being built in the United States — meaning the ones here tend to be historic. Most homes also range between 1,500-3,000 square feet.

While most Tudor Revivals are rectangular or square-shaped, they are asymmetrical. What does this mean? It means the two sides of the home are not the same. This typically translates to more freedom inside the house.

Most Tudor homes feature slate roofs. These roofs are among the strongest types available due to their weather resilience. Slate roofs will not absorb water or become warped due to exposure to moisture and can last for decades.

>>READ: What Is an iBuyer? (A Comprehensive Guide)

Cons of buying a Tudor-style home

More expensive than other homes

Tudor Revivals tend to be more expensive than other single-family homes. This is because the building materials used to construct the home are more costly than others.

Tudor-style homes are mainly found in affluent neighborhoods in the United States. 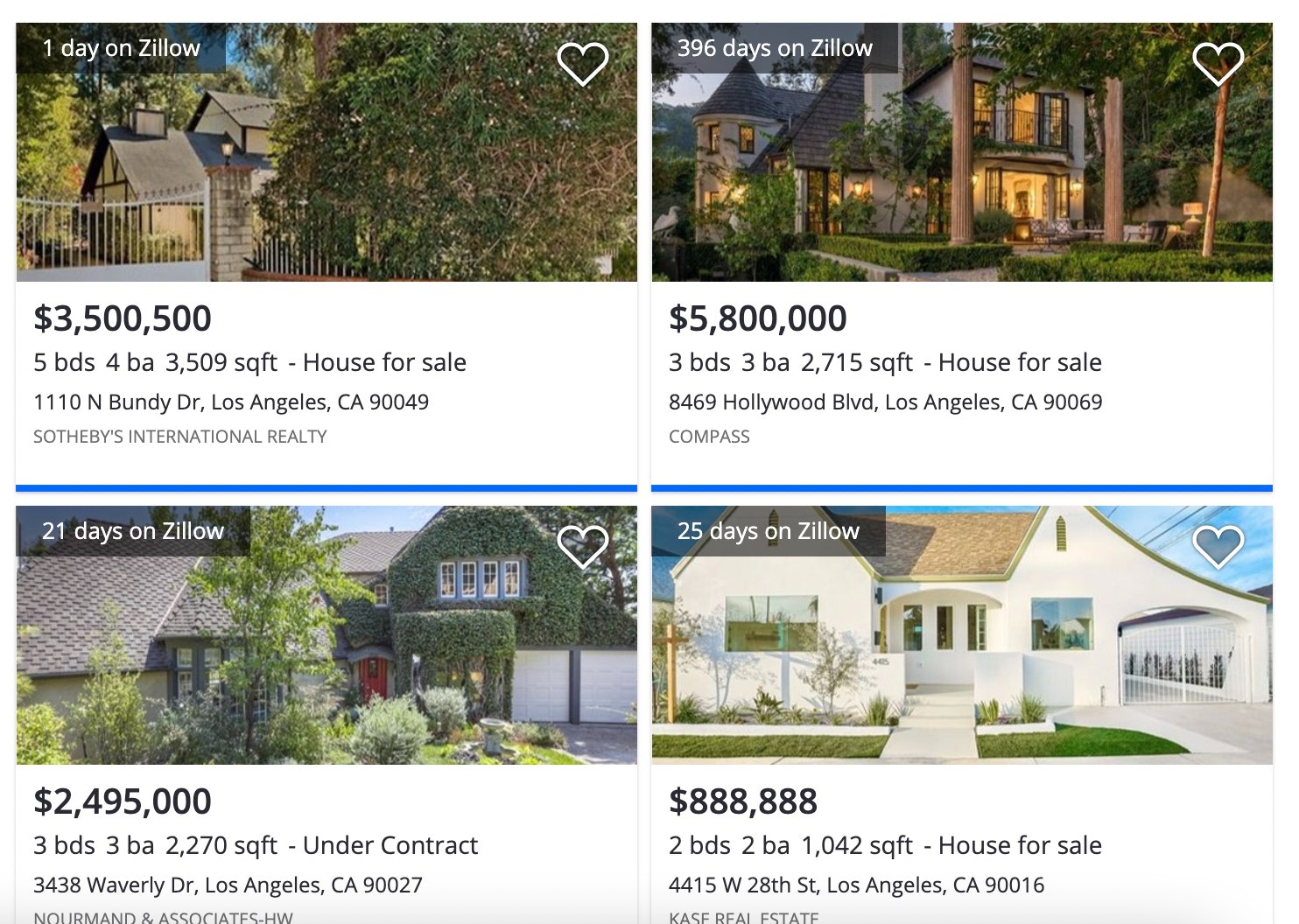 Gables and dormers can cause leaks

Tudor Revivals often feature multiple gables and dormers on the slate roof. A dormer is a roofed structure that usually contains a window.

Since the roof features both gables and dormers, it’s easy to have issues with leaks. The national average roof repair cost is $920, with most homeowners spending between $350-1,500 on average. Smaller roof repairs cost between $150-400.

Many of the features in Tudor Revivals were built decades ago. Necessary work on these homes could include updating electrical wiring, which may not have been touched since the 1950s. Other work could include repairing the faux half-timber and brick exterior.

Electrical wiring typically costs $1,300 on average. Wiring or rewiring typically averages between $500 and $2,100. Costs vary depending on how much and what type of work needs to be done.

Before you close on your Tudor home, it’s crucial to have the home inspected for any necessary repairs.

>>READ: 4 Tips for Staging Your Home By Yourself

Maintaining and restoring a Tudor home

Maintaining and restoring one of these historical beauties takes quite a bit of work. Tudor Revivals were mainly built in the 1920s — over one hundred years ago.

If you’re looking to make some upgrades, it’s important to keep the overall appearance of the home in mind.

A quick way to update the exterior of a Tudor home is to add a bit of fresh paint. The half-timbering is usually a dark contrasting color, so it’s okay to mix up the colors of the brick or stone walls.

Windows are meant to enhance a home’s natural light, but windows in Tudor homes do anything but. Most windows in these homes are not energy efficient, which may be running up your utility bill.

While slate roofs on Tudor Revivals can be a significant asset, the gables and dormers can leave room for leaks to pop up over time. The national average roof repair cost is $920, with most homeowners spending between $300-1,500.

It’s important to find a licensed contractor to do your work. Don’t rely on yourself or a friend unless you are an expert in the field. Otherwise, a new roof could cost you anywhere from $5,000-11,000.

What should you do now?

Now that you know the ins and outs of Tudor homes, it’s time to find a real estate agent. Don’t have one in mind? Clever can help! Our Concierge Service is available to help answer any questions and match you with available agents in your area.