The 7 Most Famous Houses in Los Angeles

As the entertainment capital of the world, Los Angeles has one of the most inspiring home scenes imaginable. Houses filled with histories and mysteries line just about every major neighborhood. Take a digital sightseeing tour of seven of the city's most famous houses and learn how they got that way.

As the entertainment capital of the world, Los Angeles has one of the most inspiring home scenes imaginable. Houses filled with histories and mysteries line just about every major neighborhood. Take a digital sightseeing tour of seven of the city's most famous houses and learn how they got that way.

The Hollywood sign, Tinseltown, the Walk of Fame, Disneyland — Los Angeles is known for all things entertainment, so it’s no surprise that it also has one of the most remarkable collections of homes.

Many of its large, odd, curious, and inspiring houses have earned their own 15 minutes of fame, whether it’s because of their famous owners, intriguing architecture, or haunted history.

Because walls can’t talk, we’ve rounded up seven of the most famous houses in Los Angeles to share their stories and where you can find them. 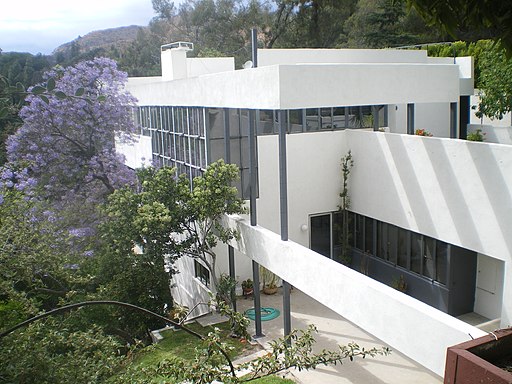 Noted by its ultra-modern architecture, Lovell House has been a Dundee Drive icon since 1929. Originally built for Dr. Philip Lovell, the home represents a major turning point in the career of its designer, Richard Neutra.

It’s considered the first steel-frame house in the United States, as well as one of the first homes with sprayed-on concrete (gunite). Its aesthetics have stood the test of time and look as stunning today as they did nearly a century ago.

The home has been featured in several movies, including L.A. Confidential and Beginners, and has been added to the list of Registered Historic Places in Los Angeles. 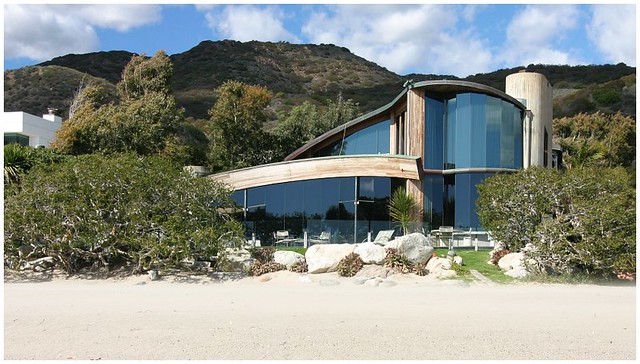 This John Lautner beach house in Malibu has everything going for it: sweeping views of the Pacific, direct beach access, swimming pool, spacious teak deck, and a longstanding history that’s made it one of the most famous homes in Los Angeles.

John Lautner is responsible for many of the city’s most intriguing homes, thanks to an interest in experimental architecture and an eye for the odd. The Segel Home on Carbon Beach was built in 1979 and has had many owners as famous as the house itself, including Courtney Cox and David Arquette and former Los Angeles Dodgers owner Frank McCourt. The home’s unique rolling shape fits snugly into its mountain backdrop, while the ocean seems so close you could reach out and touch it. 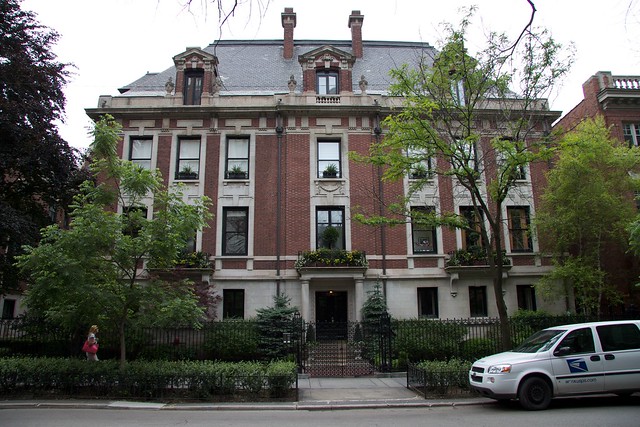 Los Angeles’s most famous home’s history goes all the way back to 1927 when it was designed for Arthur Letts, Jr., son of Broadway department store founder Arthur Letts. It wasn’t until 1971 that the home was acquired by Playboy and became the primary residence of magazine mogul Hugh Hefner, until his death in 2017.

The 29-room mansion includes a wine cellar complete with a Prohibition-era secret door, a game room, a waterfall and swimming pool, large koi pond, and citrus orchard. The home gained notable fame during the 1970s, thanks to Hefner’s lavish parties that were attended by celebrities and L.A. socialites. 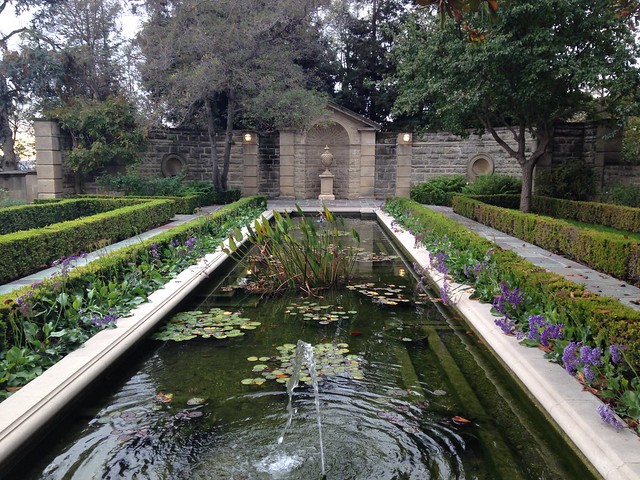 The historic Greystone Estate has been transformed into a serene spot that the public can visit, but that doesn’t make it any less interesting.

Greystone was formerly the home of the son of L.A.’s first oil tycoon, Edward Doheny. The estate took a solid three years and $3 million to build and was completed in 1928. Its stone construction throughout much of the estate contributed to its high cost.

The estate has become a popular filming location in the area and has been under the ownership of the city since 1965. The mansion maintains its original opulence and craftsmanship throughout its 55 rooms. Inlaid marble, solid oak banisters and balustrades, a bowling alley, movie room, billiard room, and secret bar are a few of its most notable features. 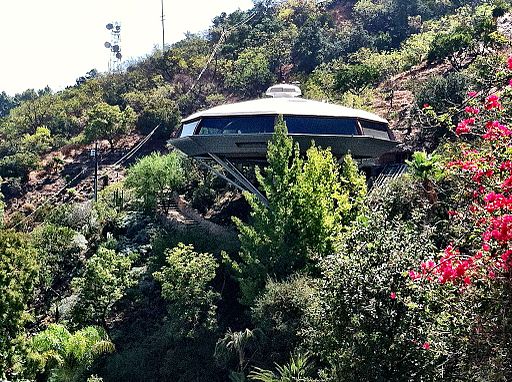 Another architectural wonder designed by John Lautner, the Chemosphere House is nothing short of otherworldly. Reminiscent of a saucer-like UFO landing in the Hollywood Hills, the home has been hailed as the most modern of its time.

Tucked just off Mulholland Drive, the octagonal-shaped home sits high above the trees on the five-foot-wide concrete pole. The home is accessed via a funicular, an incline rail vehicle operated by cable.

The lot was fittingly owned by aerospace engineer Leonard Malin, who could only come up with $30,000 of the $140,000 it would cost to build the home. The rest of the funds were provided by two sponsoring companies totaling nearly $1.19 million in today’s dollars. The home features over 2,200 square feet of living space and was occupied by Malin and his family until 1972 when he was forced to sell due to a decline in the aerospace industry. 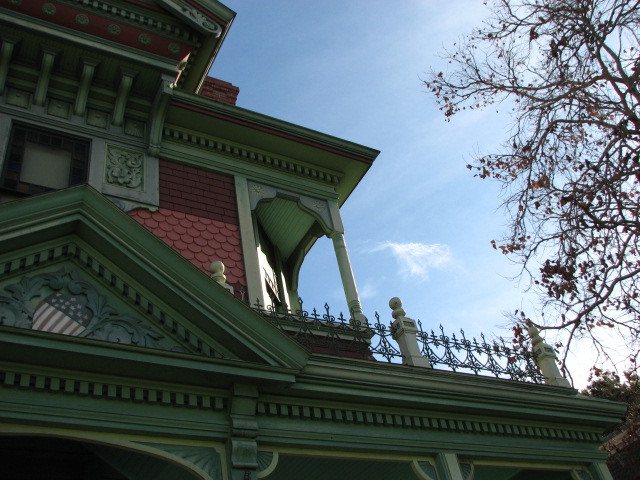 This charming old Queen Anne Victorian home was built in 1887 and has been touted as the most photographed home in the city. It earned a spot on the National Register of Historic Places in 1972 and remains open to the public for exploration.

It originally cost just $4,000 to build and was relocated to North Pasadena Avenue before being purchased by James Hale in 1901. After his wife’s death in 1966, Hale’s niece inherited the home and planned to demolish it to put in a gas station.

Instead, the home was saved by the Los Angeles Cultural Heritage Commission, who purchase the home for $1 and relocated it to its current place at the Heritage Square Museum in the Highland Park neighborhood. The home was later restored for $300,000 and has become a popular filming location. 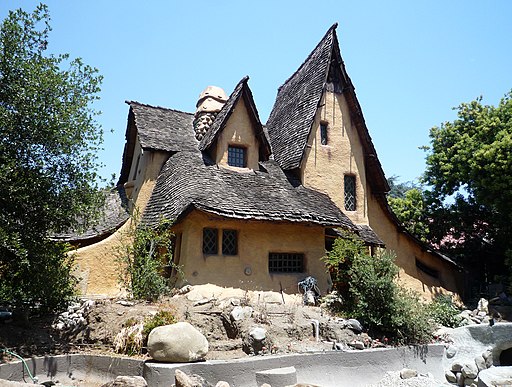 Straight out of a fairy tale, the Witch House is a prime example of Hollywood art director Harry Oliver’s storybook architecture. The home was originally built in Culver City in 1921 to serve as a set of offices for Irvin Willat’s film studios but was relocated to its present location in 1926.

The home is recognizable with its dramatically drooping roof, miniature windows, and distressed exterior paint. The garden remains intentionally overgrown for spooky effects.

When the home came onto the real estate market in 1997, it was in severe disrepair. Because of its prime location, potential buyers weren’t interested in preserving the home. It was eventually purchased by a real estate agent who didn’t want the home to be demolished.

How to Own a Real Estate Wonder in Los Angeles

Could you picture yourself living in one of Los Angeles’ most iconic homes? The houses above might not be for sale right now, but that doesn’t mean they won’t go on the market tomorrow.

In the meantime, Los Angeles is brimming with hundreds of other famous homes like these, and a Clever Partner Agent can help you find them!

Partnering with Clever gives you access to a top-rated real estate agent in your local market that knows the area well and can help you find a house with an interesting history. And since the seller typically pays the real estate agent commissions, you’re essentially getting their expertise for free.

Jamie is the Director of Content at Clever Real Estate, the free online service that connects you with top real estate agents and helps you save thousands on commission. In the past, Jamie has managed columns for clients in a variety of leading business publications, including Forbes, Inc., CEO World, Entrepreneur, and more. At Clever, Jamie's primary goal is to provide home sellers, buyers, and investors with the information they need to successfully navigate the ins and outs of the real estate industry.

Purchasing a house takes a lot of thought and preparation. Because it represents the most significant debt many Americans will ever go into in their lifetime, it's important to know

Everything you need to know about: