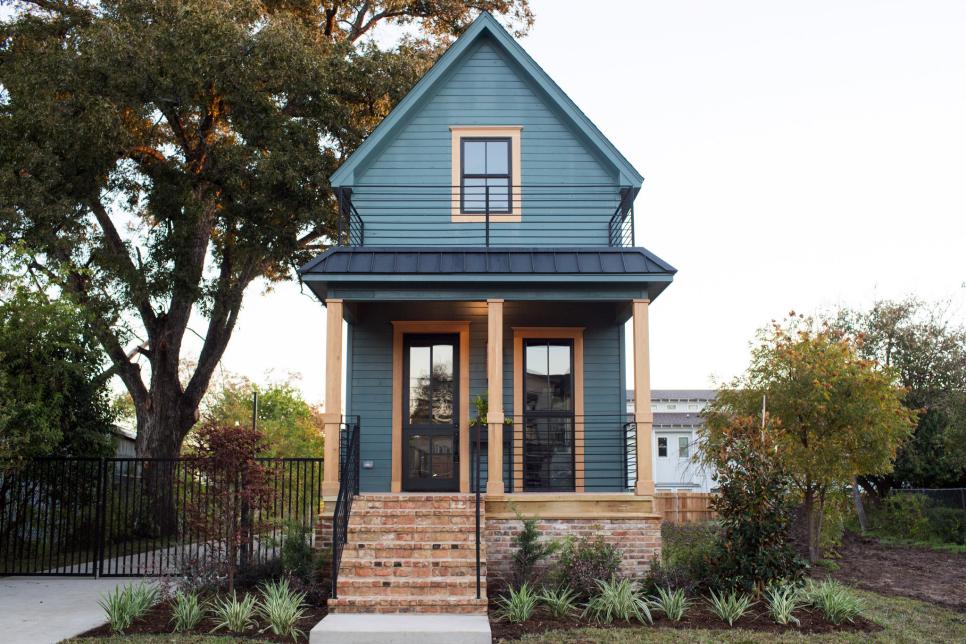 In this era of alternative living space options that focus on frugality and minimalism, terms like “tiny house,” “shotgun house,” and “railroad apartment” are thrown around quite a bit. What’s the difference?

It may surprise you to find out that a shotgun house is not a new concept. In fact, it has a long and interesting history. Let’s explore the interesting origins of shotgun houses and why they are becoming so popular in today’s housing market.

If you’re looking for a shotgun house, you’ll have a better chance by getting in touch with an expert realtor to help you locate the best ones on the market.

What is a shotgun house?

A shotgun house is a narrow home the width of one room, from one to five rooms in depth. The rooms are open from the front of the house to the back with a tall ceiling and no hallway, so one room opens into another with only partial walls between each room.

Its signature is a front-facing gable — the triangular shape created by the intersection of a sloped roof. Shotgun houses were originally built from the early to mid-1800s until the 1920s, after which they fell out of fashion.

Shotgun houses are interesting because even architectural historians argue about their true origins. There are several architectural theories on the deeper roots of the shotgun house, the most interesting of which traces shotgun houses through African-American history to traditional West African housing styles brought to New Orleans via the mass immigration of Haitians in the early 1800s.

What we know for sure is that their birthplace was in New Orleans in the 1800s from where they spread across the South as popular inexpensive housing for both lower and middle-class families.

Find the shotgun home of your dreams with a top agent

The shotgun house featured on the show Fixer Upper became one of the show’s biggest stars and introduced the term “shotgun house” to viewers across the country. The original house was constructed in 1920 and was only about 720 square feet. It was abandoned, dilapidated, and infested with animals. While originally listed at $24,000, it was given away for free when a developer purchased the land under it with plans to demolish it.

Because the land was sold, the house had to be moved to a new location, which the owners purchased for $31,000. Then the magic began and the show’s hosts, Chip and Joanna Gaines gave it a complete renovation to the tune of over $100,000. The result was an adorable 1,050 sq ft fully functioning house with 25-foot vaulted ceilings and an added loft. The house became even more famous when the owners put it on the market for an astonishing $950,000.

What are the defining features of a shotgun house?

Narrow and long, the shotgun house is a raised single-floor structure the width of about 12 feet or one room. They have a front porch with a front-facing gabled roof, but this isn’t always the case.

Once you enter the house, you can walk through the rooms from front to back with no hallways or doors and only a partial wall dividing the rooms. This allows for cross-ventilation from the front to the rear of the house. The front door opens up to the living room with the bedrooms in the middle and the kitchen in the back.

Shotgun houses can have from two to five rooms and there are many variations. There are double shotgun houses, which are two shotgun houses side-by-side sharing a single wall. You will also find camelback shotgun houses that have a partial second floor over the rear of the house.

Most shotgun houses are found in New Orleans, but they were so popular as inexpensive housing in their day that the style spread across several Southern states. After WWII, shotgun houses came to symbolize the lower class and were undesirable and many were demolished for more traditional housing.

Older shotgun houses may have sat abandoned for years and are in varying states of disrepair. The new renaissance of tiny houses has brought them back into the spotlight as hip, however, so there are quite a few on the market today.

The superior natural ventilation of shotgun houses can save on AC costs in the summer. If you find one with a fireplace, you can also cut down on your heating bill. As shotgun houses are small, they can offer a fun and affordable opportunity for creative renovation.

Shotgun houses rarely have a yard but an attached porch instead, which butts up close to the street. Therefore, they likely do not have off-street parking and are close to neighbors with little privacy. Most shotgun houses were built at least 100 years ago. Be prepared to fund repairs and upgrades on those that haven’t already been fully renovated.

If you’re looking for a shotgun home in your local market, you need a top agent. Clever Partner Agents are the best in their local markets. With Clever, you may qualify for Clever Cash Back to help you save on the shotgun home you desire.

1. Why do they call it a shotgun house?

The accepted reason for the name shotgun house is that because of the open design, you could fire a shotgun through the front door and the shot would go out the back door without hitting a wall. However, architectural historians have raised competing theories that the word “shotgun” is a derivation from West African words for “house” or “god’s house” which were passed down through Haitian freed slaves that immigrated to New Orleans in the early 1800s.

2. Is the shotgun house from Fixer Upper still for sale?

As of July 2019, the shotgun house from Fixer Upper has not yet been sold. However, data from Zillow reflects that it is currently off the market. While data from Realtor.com states that it is still listed for sale by Sotheby’s in Dallas, Sotheby’s has no record of the listing. The owners have taken it off the market either permanently or temporarily. The house, located at 624 S 7th St, Waco, TX, can also be rented through Airbnb if you want to experience a piece of the action.

3. What was the original purpose of a shotgun house?

There are many competing theories about the original purpose of the shotgun house from cheap housing for sharecroppers to maximizing real estate acreage. However, the most reasonable explanation comes from New Orleans where most shotgun houses were first built in the 1800s. The standard lot size in New Orleans for a residence was 30 by 120 feet. This may explain why shotgun houses are found both uptown and downriver in New Orleans.

4. What is a double shotgun house?

Think of a double shotgun house as a duplex. It’s essentially two shotgun houses side by side that share a common wall that divides the two houses. Double shotgun houses are a great opportunity for passive income through renting out one house and living in the other or creating more house for less by renovating and opening up the dividing wall.

Shotgun houses have become popular following the publicity of Fixer Upper and the tiny house movement. If you are looking for a shotgun house as a residence or an investment, make sure you have the advantage of an expert realtor on your side.

Circa 1933 photography of a 1910 shotgun house in Muskogee County, Georgia. | Library of Congress[/caption]