What to Know Before Moving to Portland, Oregon

Everyone seems to be moving to Portland, Oregon.

A few key traits often define this rainy gem of the Pacific Northwest: a great public transportation system (a major feat as this is usually unheard of west of the Mississippi), lovely green spaces throughout the city, a vibrant biking culture, and a mild climate.

Portland is a larger city with a tight-knit community feel. And, as showcased by the hit TV show Portlandia, a place where weirdness is not considered weird at all. In fact, in Portland, those who are different are celebrated and embraced.

Interested in calling Portland home? Here’s what you need to know before you make the big move.

The city might have a reputation for being rainy, but it is so much more than that.

If you’d rather work in the restaurant industry, Portland also has a thriving culinary scene. It is a city of chef artisans, not chain restaurants. That means there are plenty of opportunities for chefs, bartenders, and other hospitality professionals.

Drinks are also a big deal in Portland. You will also soon notice that many Portlanders take pride in roasting their own coffee and brewing their own beer and creating small businesses out of their personal tastes.

When Portland is home, there are an unlimited amount of amazing things to do. The stunning coast of the Pacific Ocean is less than a two-hour drive to the west of the city, so if you fancy a day at the seaside, you can have one every weekend.

If you prefer to go hiking, the rugged Mount Hood is only about an hour to the southeast of town.

Feel like chasing waterfalls instead? If you drive 45 minutes to the northeast of downtown, you will be at the beautiful Columbia River Gorge, an area filled with spectacular waterfalls.

If you’re a shop-til-you-drop person, heads up: There is no sales tax in Portland. Win!

Living in the Rose City is a dream come true for all foodies. Portlanders love trying new cuisine and discovering hidden cafes and eateries all over town.

As an added bonus, the city is very conscious about doing this in an inclusive way.

When you dine out in Portland, one of the first things a waiter will probably ask you is, “Do you have any dietary restrictions?” So, whether you're vegetarian, paleo, or gluten-free (or anything in between) most places to eat in the city will be happy to accommodate you.

You will also soon notice that you're not the only one in the room like this! Portland is somewhat of a haven for people who adhere to alternative diets.

Portland also has a big food truck culture. At any given time, you can have access to over 500 delicious food trucks all around the city. Sometimes called food carts by locals, these trucks’ offerings range from pad Thai to waffles on a stick and everything in between. So, no matter what you want to eat, or where in the city you're when the craving hits, Portland has something for you! You can find a map of the best food carts in this west coast city here.

Not hungry, but still need a pick-me-up?

Portland coffee is kind of a big deal. There are coffee shops nearly on every corner. And the best bit of all? Most of them are independent coffee shops who roast their own coffee. In fact, Travel+Leisure recently named Portland the No. 1 coffee city in America! That’s a pretty big honor.

Getting Around in Portland, Oregon

One of the great things about Portland is that is has a very high Walk Score.

This is likely due to the fact that the city is very environmentally oriented, so it’s important to those who live here to reduce their carbon footprint as much as they can. This means that if you're driving in Portland, just be ready to yield to pedestrians. A lot.

It’s also important to “know your quadrants” before moving to Portland. This means that you should have the following directions memorized as soon as you can:

Most street names contain homages to these quadrant dividers. This means that if your friend wants to meet on Southeast Hawthorne Street, for instance, you can at least immediately know that she is east of the river, but south of Burnside. 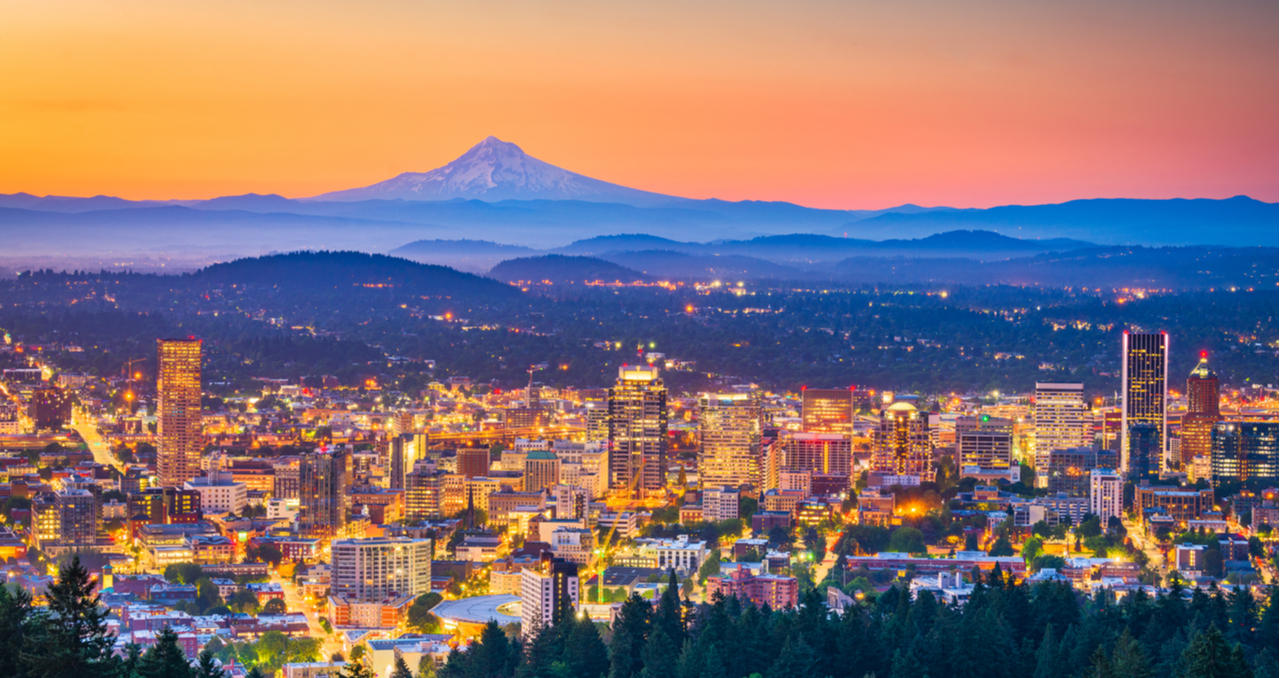 While knowing these quadrants is helpful for driving, most people in Portland prefer to hop on their bike or the bus for their morning commute. While riding through Portland, there are so many confident bikers zooming about that you might think you're in Amsterdam instead.

It’s so easy to get around by bus, streetcar, and MAX (Portland’s light rail system) that many Portlanders ditch their cars in favor of public transportation. You canplan your first trip around the city here with ease.

When you live in Portland, it’s easy to get a good education. The many campuses of the Portland Public Schools system consistentlyreceive five-star ratings and great feedback from both students and parents.

If you're interested in attending college in Portland, both the University of Portland and Portland State University are premier educational institutions.

The neighborhood of Sellwood is a popular choice among those who prefer to live right alongside the Willamette River. If you live in Sellwood, it’s easy to commute to the city center using MAX or the perfectly maintained bike path that runs right through the neighborhood.

If you prefer a very active lifestyle, then living in the Mt. Tabor neighborhood is a good fit for you. This southeast Portland neighborhood is home to a 200-acre park with plenty of opportunities for outdoor fun. And get this, it’s the site of the extinct Mt. Tabor volcano.

If you want to live in the center of it all, then you need to live in the Pearl District. Everything in this area is within walking distance—work, shopping, galleries, cafes, bars—you name it, it’s here. The only drawback is that many tourists also enjoy exploring this area.

One important thing to remember: No matter where you live in Portland, you can’t pump your own gas! Much like New Jersey, you have to rely on as gas station attendant to pump your gas for you.

The most common styles of houses that you will find in the Portland area are craftsman-style bungalows, cottages with Victorian details, and booming ranches. This is because Portland was founded in the late 1800s and grew into its own in the early 20th century when these home styles were prevalent.

Interested in making one of these classic homes yours? You're in luck! As of late summer 2018, the real estate market in Portland, Oregon, is a buyer’s market.

Buyers are no longer desperately wooing sellers and engaging in bidding wars with all-cash offers. Instead, most listings now only receive one or two offers right around asking price from buyers who need financing.

If you’re thinking of moving to Portland, Oregon, there’s never been a better time. But we recommend that you act fast. With a city with as many opportunities and as cool as this one, you never know when things will start heating up again.

Moving to Portland, Oregon, is easy when you useClever! Our agents in Portland agents love the city and know it well. They can’t wait to help you call it home, for the best price possible. Call us today at 1-833-2-CLEVER or fill out our online form to get started.

Andrew Schmeerbauch is the Director of Marketing at Clever Real Estate, the free online service that connects you top agents to save on commission. His focus is educating home buyers and sellers on navigating the complex world of real estate with confidence and ease. Andrew has worked on projects for the United Nations and USC and has a particular passion for investing and finance. Andrew's writing has been featured in Mashvisor, L&T, Ideal REI, and Rentometer.

The Clever Guide to Buying a House Out of State

Are you interested in buying a house out of state? You’re in the right place. Buying a home out of state is becoming increasingly common, as many Americans are

Everything you need to know about:

Looking to Move? These Are the 10 Best Neighborhoods in the US

These Were the Cheapest Cities to Buy a Home in 2018